Not much new to report for this day. Mostly we hung out at the pool, caught up on the internet, enjoyed his mother's cooking, more of the same. Waiting around the house in the evening in the dark, hoping the electricity will come on for a few hours. Some days we get a lot of electricity. Other days none at all. That's why it's pointless to have a refrigerator, or internet connection at home. And when the power's out, the whole neighborhood is black. It's a bit tricky to negotiate the uneven climb up and down to his folks' house, so it's better just to stay inside.

By the light of a kerosene lamp, I read a book called "Left To Tell," a griping first-person story by Immaculée Ilibagiza who survived the Rwanda genocide in 1994 by cramming into a priest's tiny bathroom with 7 other women. He hid the entrance with a wardrobe cabinet. They were given a plate of table scraps so no one else in his family would suspect he was hiding Tsutsi refugees. They estimate that a million Tutsis were massacred in 100 days. 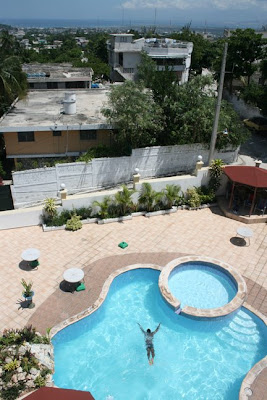 Here's a view from the top balcony of the Villa Imperial Hotel. You can see Andre swimming across the pool. Most days we have the whole pool to ourselves. We made friends with a brother and sister whose parents are Haitian, but they were born in the U.S. and live in Philadelphia. The older son understands Creole, but it seems like his little sister doesn't. They're 100% Americans. 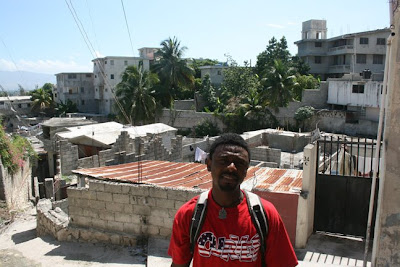 Here's Andre at the entrance to his mom's neighborhood. Most of these first houses belong to relatives. Even when we can't reach his family by phone, we can usually find a cousin nearby who can take their cell phone over to his mom, grandma or a sibling.
Posted by Carole Chelsea George at 2:20 PM