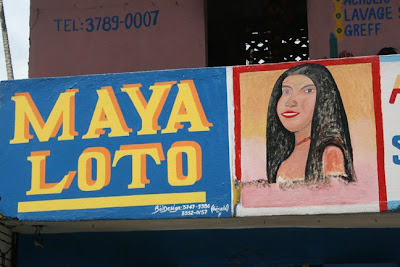 I felt it was auspicious to see this lottery ticket booth named Maya Loto, featuring a cute girl with lots of hair.

Today would have been my daughter Maya's 12th birthday, so appropriately we struck out on an adventure in her honor.

This was my third trip to Haiti. Every time I've suggested we visit Duval, the mountain village where Andre grew up with his grandparents. And every time, Andre answered that it's too difficult to get there. Most of the locals take tap-taps (small pick-ups crammed with passengers) to a junction on the main road before Kenscoff, then walk two hours over a rocky road.

When Andre's teenage cousin Ricardo set out to make the journey home to Duval I suggested we accompany him, but Andre insisted we couldn't do it. He has no idea how I've traveled in the past. I've survived 30-hour bus rides, ridden on the rooftop of buses, rode an elephant for four hours on a wooden saddle that pinched my butt, hitch-hiked from Gaza Strip to Tel Aviv, crossed illegally by canoe into Colombia from Panama, packed in with Coca-Cola bottles, rode on top of bloody sacks of butchered meat in the Andes, braved a military coupe in Cairo to put my Oma on a train to visit the pyramids, rode in an ancient Russian plane that looked like it should have been retired decades ago, took the world's slowest train in Guatemala for 23 hours with no lights after dark, packed into the Mexico City metro so tight that I couldn't move my hands to defend myself against gropers, entered Burma illegally by boat by bribing guerilla soldiers, etc. etc. etc.

As a compromise, I agreed to rent a 4-wheel-drive truck to make the journey. I almost backed out when I found out that the truck costs $135 a day. But in the end, I had to do it -- for Maya's sake. I always spent way too much money on her birthdays. Why should this year be any different?

Andre's stepdad Mathieu who grew up in Duval came along as our guide, plus Andre's brother Johnny and cousin Sherley. They were all impressed that I could drive. And driving in Haiti is not like driving in the U.S. Between the kamakazes and the rough roads, you have to keep both eyes open at all times.

Actually, it was fun to have the truck because I got to play taxi. A couple of school kids flagged us down on the main road. By the time I stopped, dozens hopped in for the free ride. Each kid took turns knocking on the cab to signal for me to stop. At least they were sweet enough to come up to the window and say "merci" for the ride. 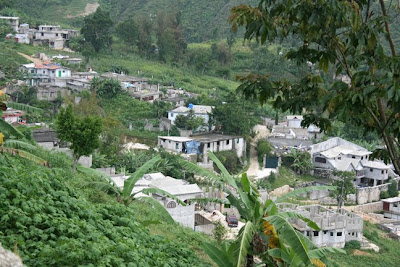 Nice views all along the mountain route to Duval. 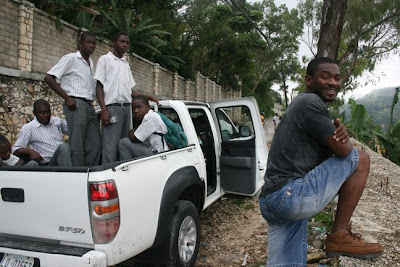 We picked up lots of school kids along the way. That's Andre's brother Johnny, the police man, who came along as our bodyguard (haha) 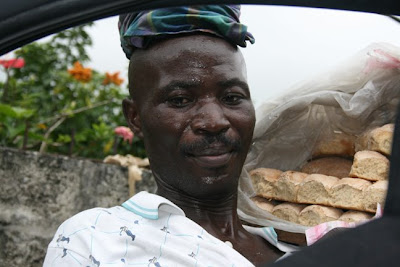 Andre asked me to pull over so he could buy his favorite bread. For me, it was kind of hard and dry, but the cinnamon stick gave it a nice flavor. Andre admitted that he too would hitch a ride to school, then spend his bus fare on snacks, like this bread. 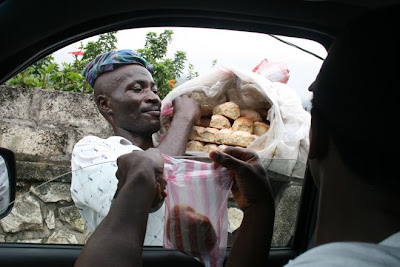 Mathieu suggested we stop for lunch at Mission Bautiste, our last chance to buy anything. I liked their gift shop too. I picked up a "Bib La" in Creole, as well as some hand-painted tap-tap refrigerator magnets, post cards, and a colorful hand-painted metal toilet paper holder for my back bathroom. The gift shop and cafe were filled with young American missionaries. The cafe featured American-style fast food, which was a treat for everyone except me. The best part was the incredible view of the green terraced mountains.

We also visited a small museum and zoo at the mission. I enjoyed the museum a lot, but the zoo was a little sad. Only the rabbits and guinea pigs (another reminder of Maya) looked happy and healthy. Andre suggested we build ourselves a vacation home in that village in the future. Not a bad idea. 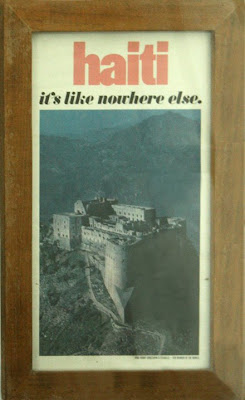 This was obviously an old tourism poster of the Citadelle which we visited in Feb. 2008. Since all the military coupes the number of foreign tourists in Haiti has gone down to almost zero. Most foreigners in the country are missionaries, UN soldiers, US and Canadian embassy employees, and charity workers. 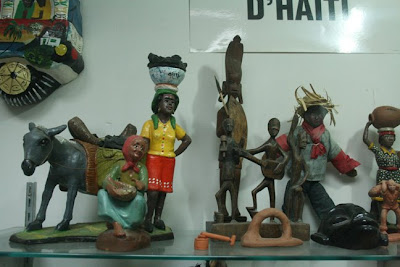 The original inhabitants of the island of Hispaniola (today shared by Dominican Republic and Haiti) were called Tainos. The Spanish managed to kill off nearly all of them. 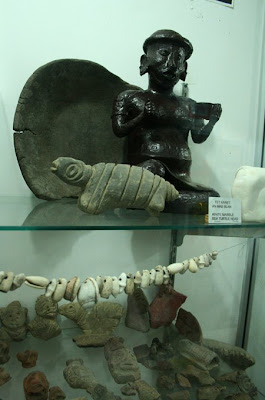 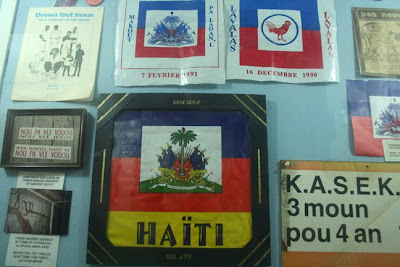 The museum featured lots of nice folk art, historic documents and photos, archaeological artifacts, etc. Check out the tap-tap below: 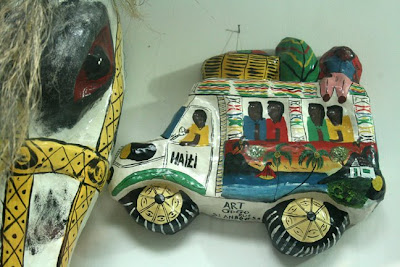 This toy helicopter commemorates the 1997 invasion of the American Marines, ordered by President Clinton. For many Haitians, the Marines were seen as heroes and saviors. Today Clinton has returned to Haiti as an ambassador. 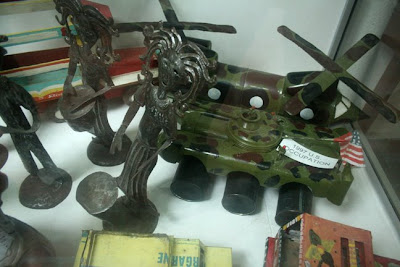 Voodoo is a popular religion in Haiti, with deep African roots. Andre's family is Christian, so they don't practice voodoo. 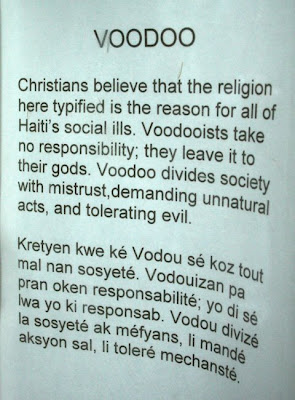 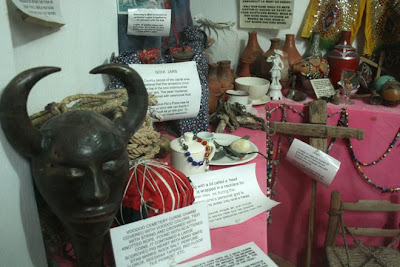 It was appropriate on Maya's birthday to see some guinea pigs. She used to have three of them. Her favorite was named Kiara. I had guinea pigs as a child too. 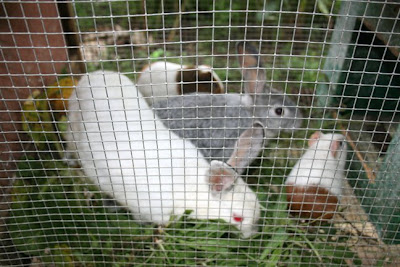 We all piled back into the truck and headed up the road. Once we turned off onto the rocky, muddy road, I was happy to have the 4-wheel-drive. I learned that besides walking to Duval you can also take a motorcycle taxi, driven by teenage boys. That would have been fun. We helped some old ladies with the heavy loads they carry on their heads. Finally, we reached a point where even our monster truck could go no farther, so we got to walk a big loop through village houses. I had bought six-dozen children's toothbrushes at a discount from my dentist ahead of time, so I had fun giving those away to all the kids we passed. They were very grateful. 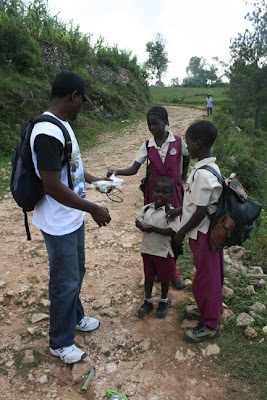 Here's Andre passing out some of the 6-dozen children's toothbrushes we brought along to give away. 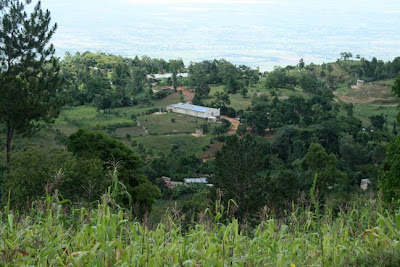 The view of a church in neighboring village Griffith. We parked the truck just beyond the church and walked the rest of the way. This is where Andre used to attend primary school. 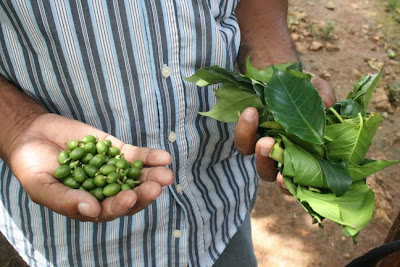 Duval-grown coffee, used as medicine as well as a hot drink.


Duval is a mountain paradise -- cool, fresh air, rich fertile soil, with awesome views of Port-au-Prince and the Caribbean Sea. They grow a variety of crops, mostly for their own use: bananas, corn, mangos, cabbage, tomatoes, chives, coffee. But fewer people live there now than when Andre was growing up in the late 1970s and 1980s. 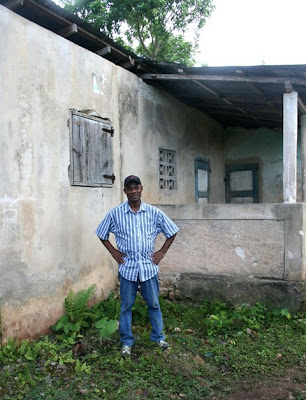 Here's Andre's stepfather Mathieu, posing in front of the stone house he grew up in. 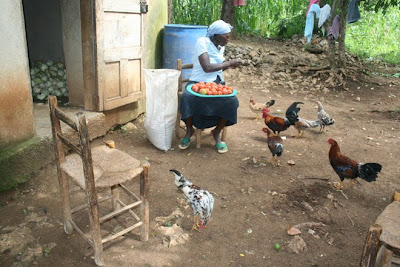 Here's one of Mathieu's sisters-in-law. 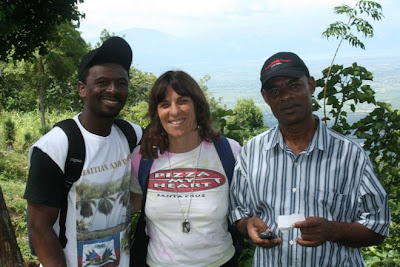 Andre, me, and Matheiu on the land where Matheiu grew up in Duval village. 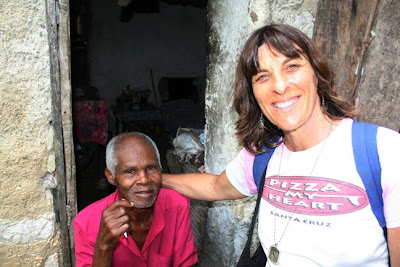 We stopped in to visit one of Mathieu's relatives named Constance. He asked who I was and Mathieu answered that I was Andre's "madame." They spoke in Creole, of course, but now I can understand more than before. 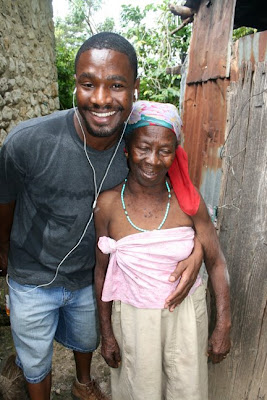 We stopped in and visited a few of Mathieu's relatives before eventually reaching Andre's grandpa's land. The only family living there now is Ricardo's mother, grandma and siblings. His father, Andre's favorite uncle, had been brutally murdered over the inheritance when Andre's grandpa died. His widow and her mother are raising the four kids, two of whom live with Andre's mom in Port-au-Prince during the school year. When Andre was growing up, there was a one-room school house about 20 minutes away by foot. Now the primary school kids go to a bigger school much farther away, but they still have to walk. But there's no high school in the villages. 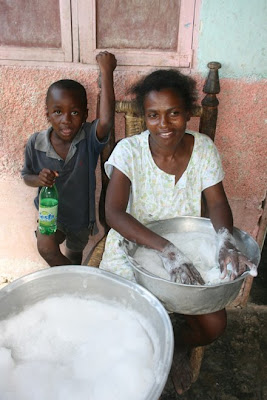 Andre's aunt and her kids still live on the grandfather's land in Duval. 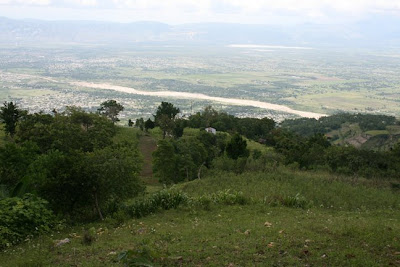 The view from Andre's grandfather's property. The original house no longer exists. You can't see it in this picture, but that's Port-au-Prince, the capitol of Haiti, below, and the Caribbean Sea beyond. 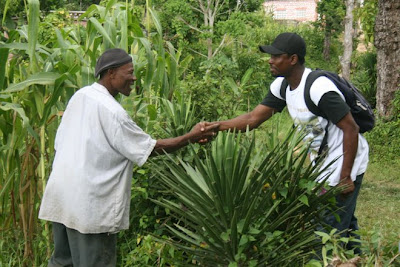 Everyone in the village remembers Andre even though he hadn't been back in 7 years. This young woman below was just a child when Andre was living in Duval. Now she has two kids of her own. 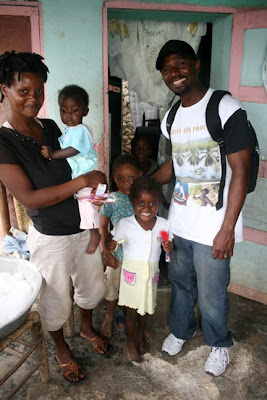 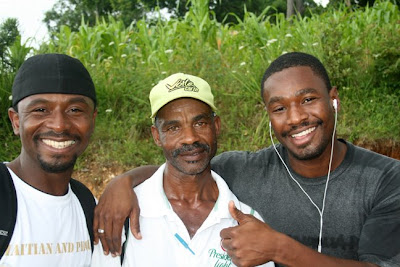 I could tell right away that this man, Daniel, is Mathieu's brother, and father of Andre's cousin Peter who I met in Santo Domingo.


The afternoon thunderstorms almost caught us, but we reached our truck just in time. I had to admit that, despite the inflated price, the truck was a good idea.
Posted by Carole Chelsea George at 4:21 PM