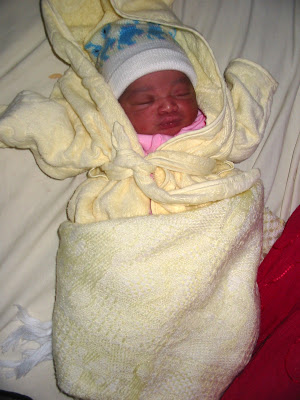 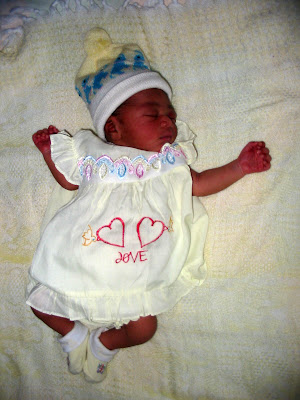 On May 4, Andre's sister Marjorie and her husband Lesly sent us an email birth announcement with two photos and the simple message: "Receive Lyse-Mia's picture. Our new baby."

We found out a few weeks later than they'd chosen Andre to be the godfather. Since we were already planning a trip to Haiti for June 11-25, we decided to have a big party to celebrate her baptism on June 21, our last Sunday, coincidentally Father's Day in the U.S.

As it turned out, Haiti was having elections on June 21, so the priest decided to postpone the ceremony. We had no choice, but to go ahead with our party plans since we were leaving a few days later for the U.S.

Andre and I offered to pay for the food and drinks and eating utensils. His mother and aunties got busy preparing the menu. To stay within our budget, we decided only to invite the closest relatives -- which added up to about 75 adults and children. The party was held in the patio outside Andre's mom's house, which isn't that big. But we all squeezed in and had a good time. We even had music, despite the limited electricity in Port-au-Prince. The power comes on only a few hours a day, mostly at night, but it didn't matter because Andre had brought his brother Johnny an iPod and rechargeable dock.
By hosting a party we got to visit with most of Andre's relatives without having to travel all over the city. It had been over a year since they'd seen Andre, and the first time as a married man, so they all gathered together, despite the chaos in the streets due to elections. I got busy taking portraits of everyone, which I printed up once I got back to the U.S. The mail service to Haiti is unreliable, so I sent them through a friend who works for the U.S. embassy, and Lesly will pick them up from her and distribute them. Here's a selection of my favorites: 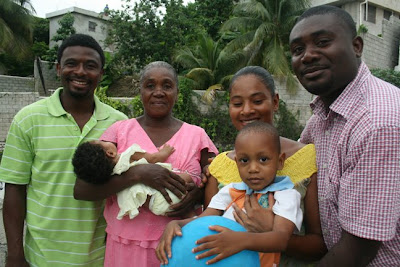 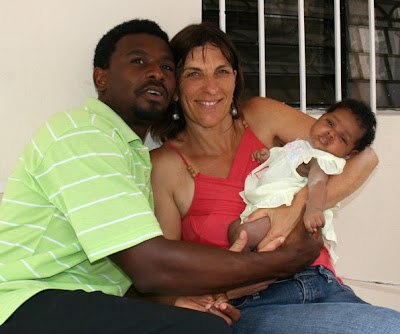 Lyse-Mia seemed very smart and alert for just a month and a half old. She also has a nice head of hair. It was nice to meet Lesly's mother for the first time. 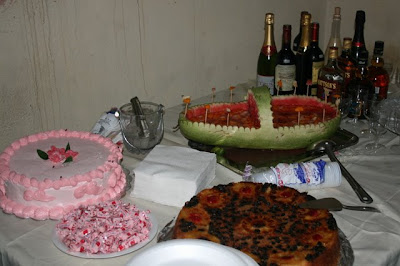 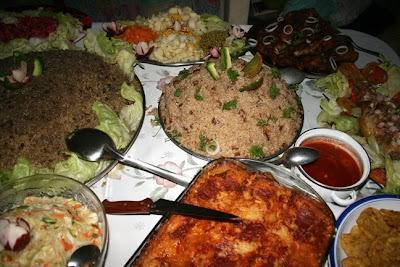 Lesly ordered some cakes and bought the drinks, but the rest was homemade -- lots of salads, rice with pigeon peas, fried plantains, lasagna, macaroni and cheese, fried chicken, fish. They served popcorn as an appetizer. 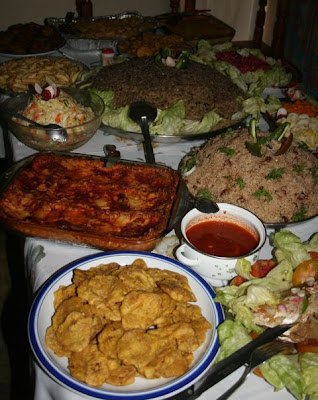 No Haitian kitchen is complete without a deep wooden pestle and mortar to mash and grind all the great spices they put into their cooking. With so little electricity, there are few blenders and no food processors or electric grinders. Coffee is made by roasting the beans over a charcoal fire and then grinding it with a pestle and mortar. 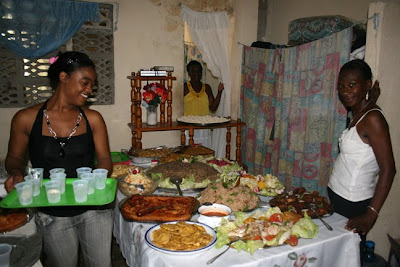 The women decided that it would be more orderly and fair if they took the food out to the guests. Andre's younger sister Beatrice (left) and Aunt Miche (right), along with some other aunts, took charge of dishing up the plates and serving it. I did my part too. 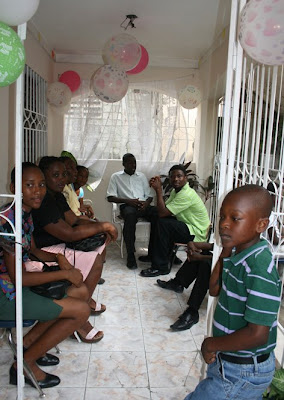 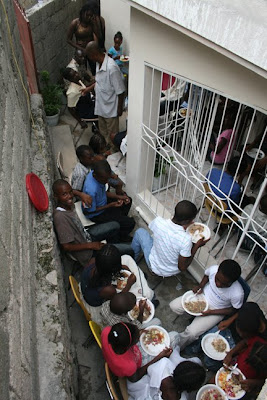 Like every party I've ever hosted, it always looks like nobody's coming at first. You rush around getting everything ready, then wait for people to show up. But before we knew it, we had a full house. 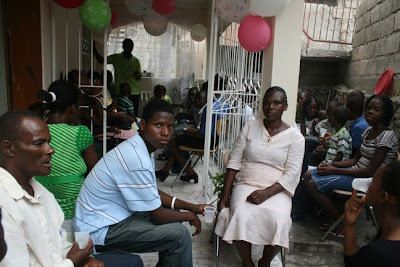 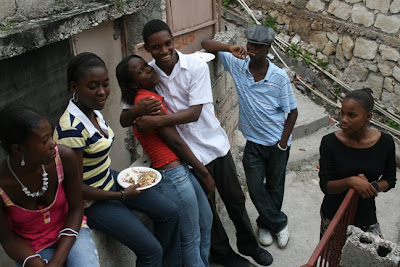 As usual, the teens like to hang out with each other, so they took their food and went next door to one of the aunt's houses. 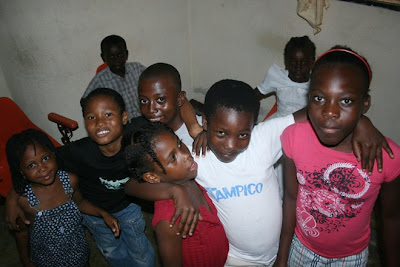 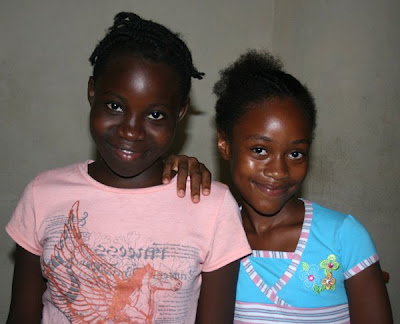 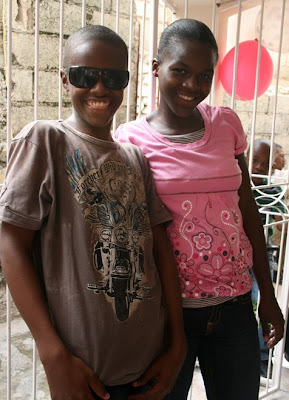 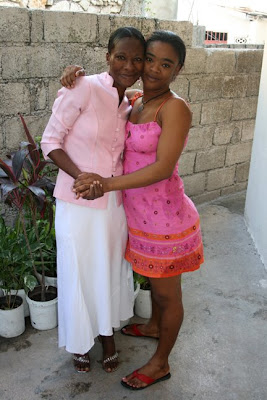 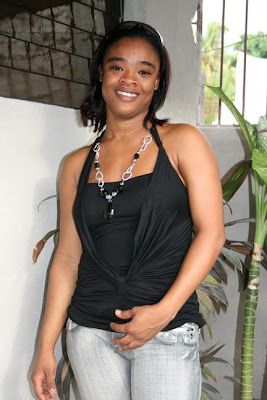 Here's Beatrice with Aunt Miche when Miche came back from church and Beatrice was cleaning up for the party. On the right, Beatrice is dressed to impress. 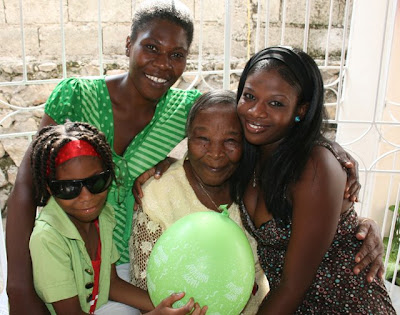 Andre's grandma is always the guest of honor at any gathering. 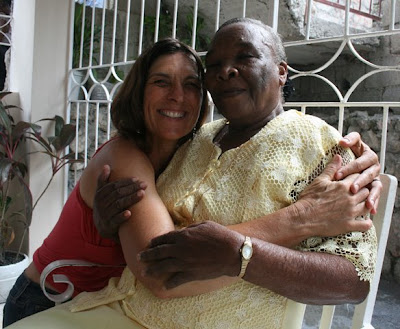 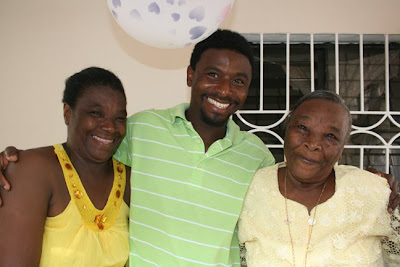 Here's Andre with his mother and grandma.
Posted by Carole Chelsea George at 3:59 PM