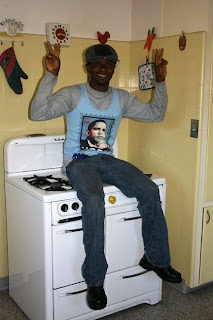 I'm so happy for my new husband Andre, an immigrant and a black man, that he could be here in the U.S. on this historic day. I know it sounds cliche, but the idea of President Barack Obama gives me a lot of hope for our future and pride to be an American. His acceptance speech last night was so inspiring -- confident, yet humble. Now Barack has his chance to prove that he can be a capable leader...for all Americans.
Posted by Carole Chelsea George at 8:57 AM No comments: 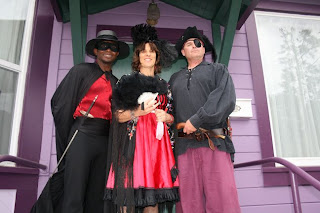 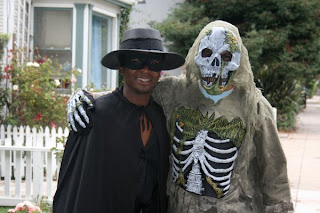 Here we are on a neighboring pirate's porch. He spotted us on our way to the wharf and immediately offered Andre a spare saber he had at home...Andre with his classmate Jaime on their way to the Halloween party in their ESL class. 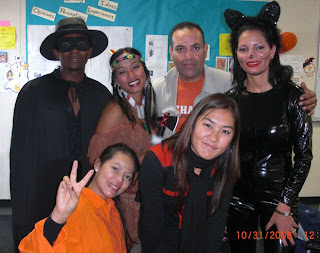 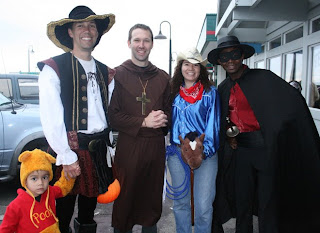 More friends from ESL class, representing Dominican Republic, Mexico, the Philippines and Thailand. On the wharf we ran into our neighbor Eric, his son Javier, his brother the father, and wife Carmen. 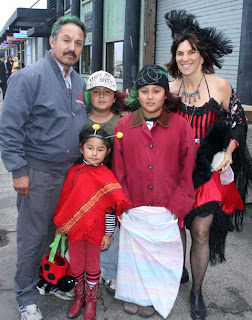 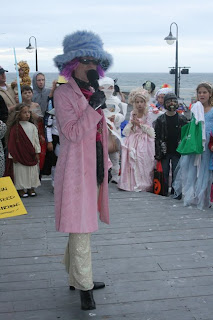 More friends on the wharf -- Sergio and kids. His wife Griselda and their baby were parking the car...Friend and fellow writer Karen Kefauver as emcee (Mistress of Ceremonies) for the wharf's Kids Costume Contest, which she does every year. 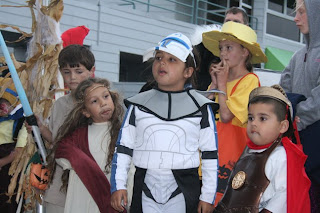 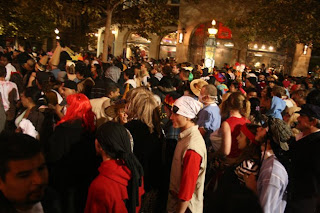 Some samples of the kids' costumes. Then at night we walked over to Pacific Avenue. Because of the light rains, only 20,000 revelers packed downtown Santa Cruz this year -- which actually made it much easier to maneuver through the crowds. 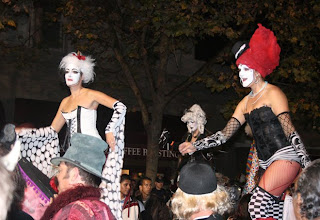 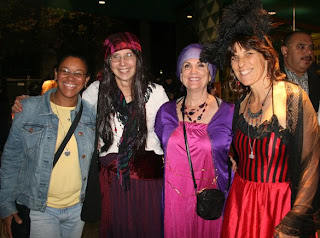 Samba dancers on stilts stole the show and their drummers kept the crowds bopping to the beat...The top echelon from Santa Cruz Adult School -- Personnel director Hermanita and principal Mary, along with a big shot from Watsonville Adult School. 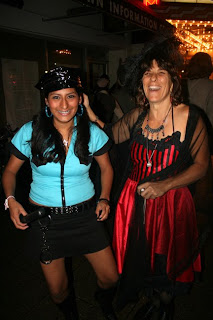 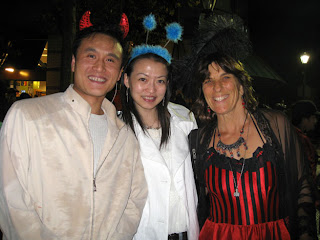 Carla the Cop stopped to arrest us. Long time, no see Yuan and Beibei, Chinese computer housemates from Walnut Avenue house. They're living in San Jose, but couldn't miss a chance to visit Santa Cruz. They got married this year after 9 years together. 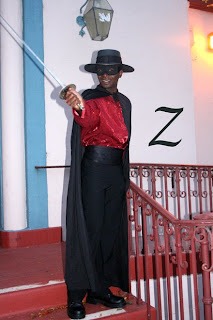 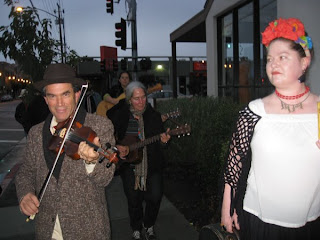 The mark of Zorro...Musicians pull up the rear in the Day of the Dead procession in Watsonville on November 1. 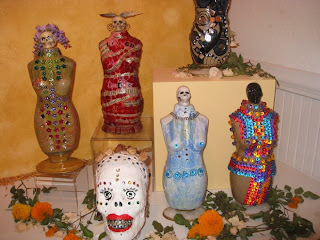 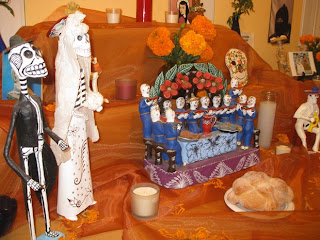 Beautiful artwork and altars in the Pajaro Valley Arts Council's Gallery in Watsonville. 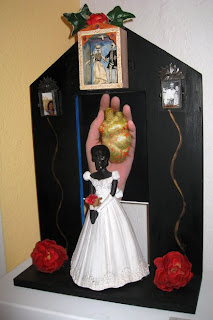 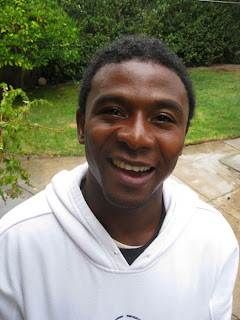 Originally, I had hoped to go to southern California for a Senior Olympics racquetball tournament and 109th annual Day of the Dead Celebration at the Hollywood Forever Cemetery, with our friends, the Becerras. I had been planning on it for a long time, but a week or so ago I realized we don't have the money or time to rush down there. I wanted Andre to see the wild and crazy Halloween costumes on Pacific Avenue first, so how would we squeeze in a 7-hour drive? Plus, the round-robin racquetball tournament was all day Saturday, the same day I wanted to help build the altar with Marta, Diane, Teresa, Trisha, and Tina Becerra. Diane and Armando's daughter Elena died of leukemia at the age of 5, about 30 years ago. Starting last year, the Becerras included my little Mayita as a butterfly on their amazing altar which won 1st prize and a check for $3,000 this year! Now I'm really bummed I missed it.

But we had a nice Halloween, as I hope the photos portray. The next evening we celebrated Dia de Los Muertos (Day of the Dead) in Watsonville. In comparison with the Hollywood Forever Cemetery, it was a small and quiet event, but also another chance to honor the memory of Mayita.
Posted by Carole Chelsea George at 10:11 AM 1 comment: