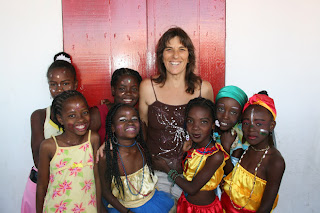 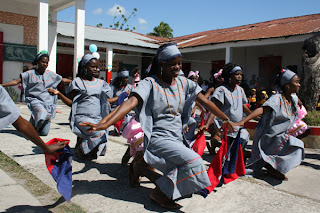 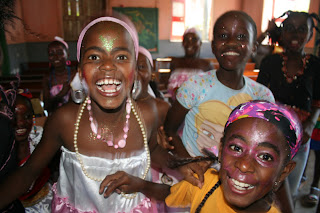 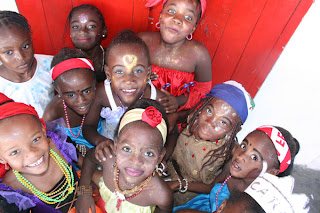 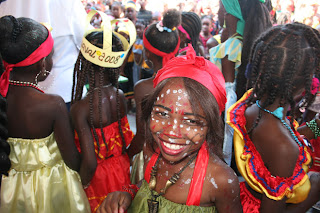 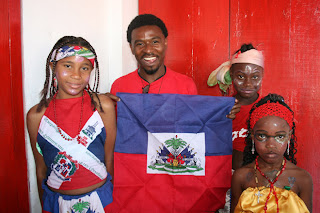 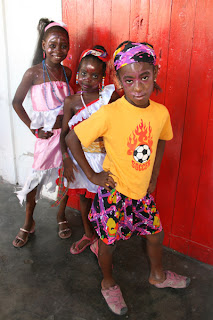 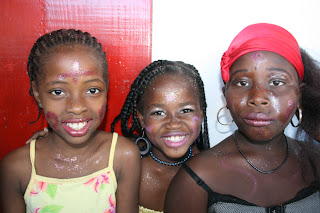 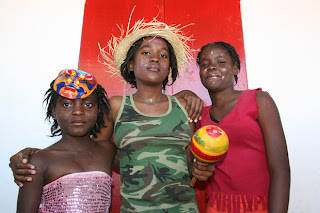 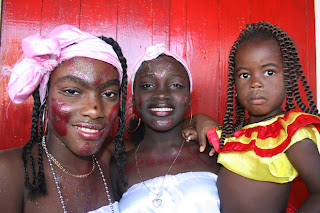 The dusty streets of Les Cayes were filled with glittery children in carnival costumes. We followed several, asking to take their pictures, before two little ones invited us to the festivities at their school.

Ecole Sainte Marie is a private Catholic school for girls. It was bustling with energy and excitement when we arrived. We knew better than to start photographing right away, and looked for someone in charge. The teacher took us to the director, a stern looking nun, with the archetypal ruler in hand. They decided it was no problem at all for us to photograph and videotape – for a donation of 500 gourde, about $13 U.S.

Always willing to do my part to promote education in the third world, I quickly agreed. Stepping out of the office and into the courtyard, cameras in hand, I was immediately swarmed by dozens of little cuties, all begging to be photographed. After taking a bunch of wild pictures of girls fighting each for my attention, I tried to limit them to three at a time. That just created more chaos, as they shoved and shouted, all wanting to be photographed first.

The carnival program mainly consisted of a DJ blasting compas music, while the little girls bumped and grinded seductively. I kept expecting Mother Ratched to put an end to the mayhem, but the most intervention I saw was a teacher pulling down a sexy dancer’s too-short skirt. From an American perspective, I felt slightly uncomfortable with such little girls imitating MTV-style dancers. But I guess it’s cultural. Young Mexican teens often look like hookers to me, with their tight revealing clothes, spike heels, and heavy make-up, so what do I know?

After a few hours of fighting off carnival revelers, Andre and I went to the office to thank the director and say good-bye. No way! They were not letting us off that easy. The real program was just beginning. To hold our interest, the first teacher we met bustled off and started organizing the performers. Several groups of girls from different classrooms, each in matching outfits, lined up around the courtyard. The DJ blasted some more music and the performers danced. The highlight was a choreographed finale by the oldest girls, very impressive indeed.

At that point, we were finally able to break away, but not before exchanging email addresses and phone numbers with the head teacher and promising to send copies of all the photos.
Posted by Carole Chelsea George at 1:37 PM