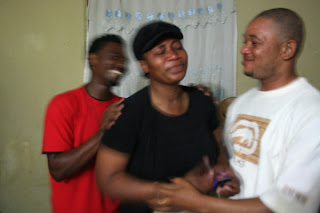 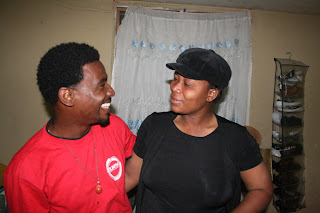 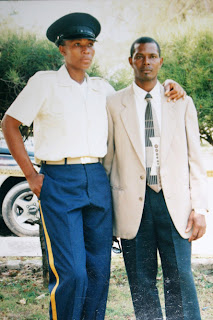 Andre’s Cousin Ermite cried when she hugged Andre for the first time. As of a week ago, she didn’t even know he existed. Her Uncle Pierre only had one child, a grown son in Port-au-Prince – or so the family thought – until Pierre confessed on his deathbed to having 10 kids.

“Well you know those soldiers,” said Lesly, Andre’s brother-in-law, who coincidentally is from the same village and knows the family of Andre’s birthfather. “Every few years they were sent to another military base in another part of the country and…well, things happened.” After a little detective work, Lesly put the two cousins in touch by phone on Tuesday. “Hi Cousin,” said Andre, grinning broadly. Despite a large extended family on his mother’s side, he’d never met anyone on his father’s side.

This was too good an opportunity to let pass. We delayed our plans to travel north, and decided to go to Les Cayes right away instead, to meet Ermite in person. Andre and I had stopped off in the small colonial town on the southern coast of Haiti last year on our way back from Ile-a-Vache, romantic Cow Island. I fell in love with the colorful, photogenic, laid-back town. Some of my favorite pictures of Haiti were taken in Les Cayes.

On Thursday, Andre went to visit a friend on the far side of Port-au-Prince. Meanwhile, I had a luxurious four hours to myself with free wi-fi in a hotel restaurant. After catching up on email, I expected to buy round-trip flights online with a credit card. What was I thinking? I couldn’t even find a website for any of the local airlines. It’s not that Les Cayes is that far away; it’s just because of the condition of the roads that even a short distance seems like a long journey.

Andre arrived later than expected, covered in dust and complaining about public transportation in his country. Mostly they use small pick-up trucks, converted to “tap-taps,” with benches on either side that extend out the back, covered with lifted camper shells. The passengers pack in and spill over onto the back bumper and sides. On longer trips, passengers ride on top of buses. The other day I spied some laborers playing cards on top of a loaded truck on their way home from work.

We walked down the main drag, Rue Delmas, to Voyages Travel. Posters of India and Nepal lined the walls, which made me wonder if Haitians really travel to Asia or did the owner just like free posters. There was one customer ahead of us, and three employees, but only one actually working. The others were watching a soccer match on a portable TV. When it was our turn, the agent had to manually redial the number again and again. Even when it wasn’t busy, no one answered. Finally she reached someone, only to learn that all flights from Port-au-Prince to Les Cayes was fully booked for the next three days.

“Let’s take the bus down and fly back,” I suggested to Andre, anxious to get out of Port-au-Prince after a week.

“What’s the emergency? Let’s just go to Cap-Haitien and forget about Les Cayes,” he said. At that moment, the dread of a 5-hour bus ride over bumpy roads, packed in with squabbling Haitians, outweighed the excitement of meeting his cousin. I refused to give up so easily. As a white female, I can always get the front seat next to the driver. Normally, I don’t like special treatment, but to make Andre happy, I’ll do it.

Sure enough, the next morning we arrived at the bus station and quickly negotiated a front row seat – where we waited for several hours while the ticket-taker gathered passengers. As a seasoned traveler in Haiti, I expected nothing less. Kicking off my shoes, I settled down to enjoy the show: a non-stop parade of buses colorfully painted with pop stars and religious images; school kids in uniform walking hand-in-hand; cock handlers carrying their prized fighters underarm, the heads of the roosters covered by little cloth bags; vendors balancing baskets of toiletries, cookies, crackers, coconut sweets, wash clothes, bandanas, and sodas on their heads; and the occasional fight breaking out over vehicles blocking each other.

The ride to Les Cayes is beautiful, traveling along the northern coast, across the mountains, and finishing on the southern coast. For me, it’s never a dull moment, and the cool breeze feels great. I put my feet up on the dash, camera ready, bouncing along to Haitian compas music. Last year, we flew to Les Cayes and bussed back. This time we’re doing the opposite. I’m also looking forward to the flight, with its view of small islands and turquoise sea.

When Ermite arrived and ran in to hug her cousin for the first time, I felt like crying too. Ermite and her husband Bodelais couldn’t be nicer. Their two-year-old son Dave, on the other hand, was terrified to enter the room with Andre and me at first, but little by little he warmed up. I couldn’t take many pictures because the light was dull, but at least Les Cayes has 24-hour electricity – a luxury I haven’t experienced in a while – so we weren’t using candles and kerosene lanterns as we do in P-au-P.

Ermite shared her wedding snapshots and some nice pictures of her graduation from police academy in 2003. She’s standing next to Andre’s half-brother Pargaud, her favorite cousin. He resembles Andre slightly, as does Ermite. Unfortunately, she doesn’t have any photos of Andre’s father or their grandparents, but Pargaud should when we visit him in P-au-P.

Lesly accidentally wrote the phone number down wrong, so we couldn’t reach Andre’s brother before we left P-au-P. Ermite called him while we were there and the two brothers spoke for the first time. Now Pargaud’s anxiously awaiting Jan. 7 when Andre and I return to the capitol. We’ll definitely stay a couple of days, so the two brothers can get acquainted. Of anyone still living, Pargaud knows the most about Andre’s birthfather. He was born when their dad was very young and raised by their grandparents. When Pierre died, Pargaud inherited all his documents and photos. Hopefully, Andre will get to see some of them.

Andre told me once that he’d always dreamed of hugging his father. He wanted to believe that maybe it wasn’t true; maybe he was still alive. Even though he missed his chance with Pierre, at least now he knows a cousin and will soon meet a brother.
Posted by Carole Chelsea George at 1:31 PM