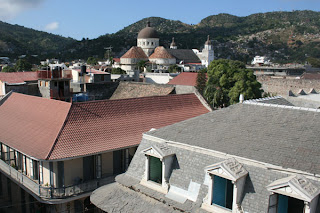 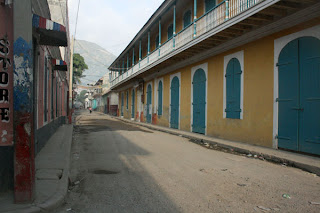 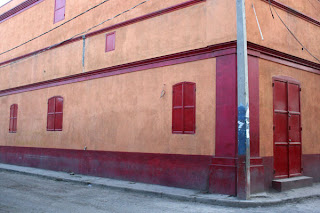 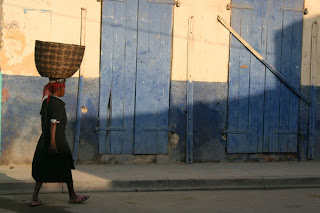 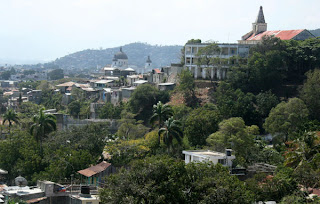 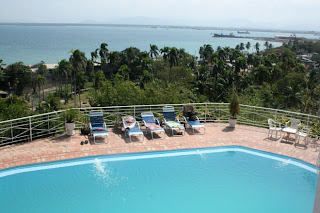 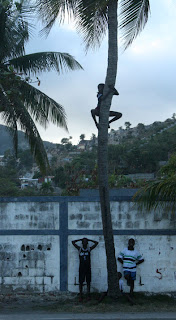 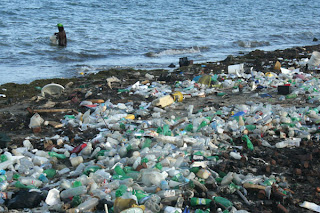 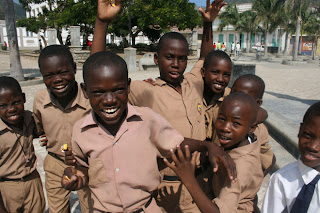 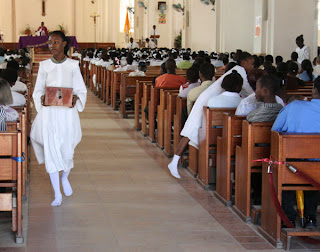 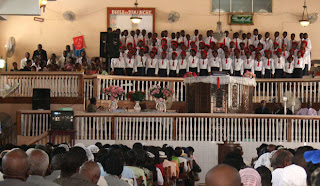 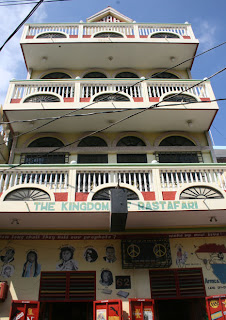 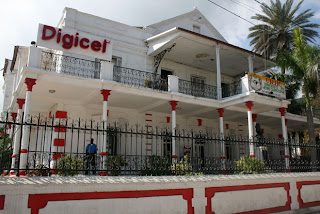 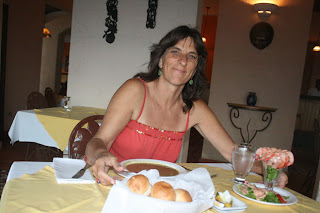 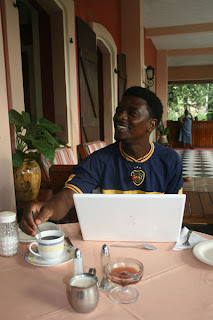 PHOTO CAPTIONS: 1-2. The domed Catholic Church, which we could see from our hotel balcony, 3-5. Street scenes of Cap-Haitien, 6-7. Views from Hotel Mont Jolie, 8. A boy shimmying up a coconut palm, 9. Garbage piles up everywhere, 10. Boy Scouts ask the "blanc" to take their picture, 11-14. The four great religions in Haiti: Catholic, Baptist, Rastafarian and the Cell Phone, 15-16. Me at the Auberge du Picolet and Andre at the Roi Christophe, our two favorite hotel restaurants with free wi-fi.

Every city wants to be the "Paris" of their part of the world. Buenos Aires is called “The Paris of Latin America” and Cap-Haitien was once known as “The Paris of the Antilles.” But to me, it actually resembles New Orleans…after Hurricane Katrina.

The ride from the airport passes right through the slums. I kept expecting it to get better, but even the downtown area where the recommended mid-priced hotels are looked pretty rough. I knew without asking that Andre was concerned about our safety.

Since he’s more particular than I am, I let him check out the first hotel. He reported it to be noisy, dirty, small, and dark – for $60! Our taxi driver suggested the historic Roi Christophe where Napoleon’s sister once lived, complete with swimming pool and casino, which I knew to be over $100 a night. To stay on budget, I requested the Hotel Akennsa instead. This time I checked it out, passing a noisy generator and bar on the way up to the third floor. I was surprised to find the room quiet inside, with an ocean view, and a large lovely balcony right beside it. Andre negotiated 3 nights for $180 and we moved in.

Once we got acquainted, I actually started liking Cap-Haitien. If I squinted just right, I could imagine cobble-stoned streets instead of dirt, and fresh paint instead of crumbling walls. It must have been a beauty in its day. We walked down to the waterfront and once we got past the commercial port and the piles of garbage, there was a nice palm-lined malecón for strolling, with a luscious warm breeze off the ocean.

We found delicious meals and free wi-fi at two fancy hotels – the afore-mentioned Roi Christophe with its lush gardens and Spanish-style courtyards, and the elegant Auberge du Picolet which faces the ocean. The employees in both locations understand the meaning of the word “service,” which isn’t always the case in Haiti. And the food arrives in a timely fashion, rather than an hour-plus later, as in other places. Breakfast for two, consisting of Creole-style omelet, fruit plate, pancakes, fresh juice and coffee was $16, which seemed reasonable.

Cap-Haitien’s main plaza is huge and beautiful. The classic domed cathedral can be seen from our hotel balcony, which reminded me of the film “A Room with a View,” set in Florence, Italy. The population of O’Cap, as the Haitians call it, tops 100,000, making it the country’s second largest city. However, it felt a small town and I was happy to be walking everywhere again, even after dark.

It’s also a lot cleaner than the capitol. People still throw garbage everywhere and trashcans are hard to find. But every morning, the women sweep the streets, collecting the garbage into piles, which will be burnt at night.

The main reason most tourists come to Cap-Haitien is to visit the Citadel, a mountain fortress 20 kilometers to the south, and Sans Souci, its accompanying palace, both constructed for King Christophe in the early 1800s. We waited to go early Monday morning, to avoid the weekend crowd.
Posted by Carole Chelsea George at 5:34 PM

Greetings,
I'm working with Engineers Without Borders at the University of Minnesota developing a safe plastics-recycling process for use in Haiti. May we use your picture of Lo Rez beach to present the project?

I am trying to contact the people at Auberge au Picolet in Cap Haitian to reserve a room when Igo start my project there this fall. How do I reach them? Ane