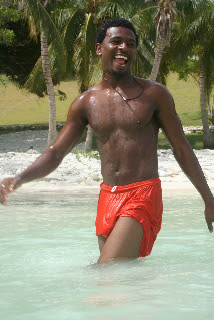 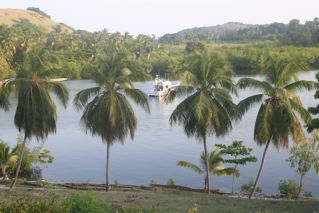 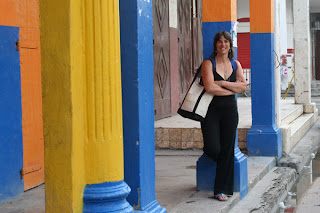 Wow! So much to write about since the last time. I don't even think I'd arrived in Haiti yet and now we've been here more than a week and planning our last few days. It's been such a great experience. I'd always wanted to visit Haiti, but never imagined it would be with a Haitian boyfriend to meet his family.

Andre says I passed the test. He says everyone in his family loves me so much. They are all so sweet and friendly. My age doesn't seem to be an issue at all. In Port-au-Prince, we stayed at his sister Marjorie's, with her husband Lesly and 7-month-old son Joel. What a joy to have a baby in the house. He is so mellow compared to Ms. Maya who was tremendous. They can even leave Joel in a playpen or stroller in the house and he's totally content. Maya's life was go-go-go in comparison. Andre's mother is also staying at Marjorie's while she recuperates from a massive hysterectomy. She showed us her scar from the surgery. Wow! They cut her across the stomach, like they used to in the old days in the U.S.

Haiti is nowhere near as poor or dangerous as I'd heard. It doesn't seem much different from Dominican Republic except there are very few foreign tourists. I feel sorry for Haiti because they have some of the most beautiful beaches I've ever seen, but no one will come here because of the reputation for violence and poverty. Dominican Republic, which shares the island of Hispanola, does a great job of attracting European and American tourists. But so far, I haven't seen anything attractive about Port-au-Prince, the capitol city. It doesn't have a nice colonial zone like Santo Domingo does, and it's piled high with garbage and suffers from horrendous traffic.

On Sunday we watched the finals for the American Cup between Brazil and Argentina. Andre was outnumbered by all the Brazil fans who jumped up and danced every time Brazil scored. Final score 3-0. The power went out at Marjorie's house just as Andre and Lesly got the TV set up on the patio to get out of the heat of the house. So we had to go to the mechanic shop in the neighborhood because they have a generator. Andre and Lesly helped pitch in for the gasoline to run the generator. I was surprised how many women and children are completely fanatic about "football" as soccer is called everywhere else in the world. I asked Andre why he didn't jump up and dance (besides the fact that he wanted Argentina to win). He said, I'm a fanatic, but I'm not sick.

Andre and I went off to an island paradise at the suggestion of our friend Khadija who used to work for USAID:Haiti. She had her going-away party just days before I arrived in DR. She's enjoying the summer off with her daughters before going off on her next mission in Sudan, Africa. Ile-a-Vache was everything Khadija promised. The French couple who run Hotel Port Morgan are really sweet and their accommodations are very nice. The views of the bay were so romantic, and the AC was a nice touch. We took a 9-passenger plane from Port-au-Prince to Les Cayes, a taxi to the dock, and speed boat from there, all arranged by the hotel. On the way back we stayed in Les Cayes, a colorful quiet town where I had a field day walking around and taking photographs. The next morning we took the bus back to Port-au-Prince, scoring seats up front with the drivers. Another scenic adventure for 4-1/2 hours.

Tonight we're having dinner with some friends of Khadija's. It will be nice to see how the other side lives here in Port-au-Prince. In Marjorie's neighborhood they're lucky to get electricity for more than a couple of hours a day and water has to be pulled up from a well. Drinking water is bought in 5-gallon bottles and a bag of ice is purchased daily to cool the drinks. No one has a refrigerator, but without electricity, what good would they be anyway. Same for a fan.
Posted by Carole Chelsea George at 1:04 PM