I'm crazy about trains. I have been all my life and my daughter Maya was too. Even as a toddler she would get excited and say "Choo Choo, Choo Choo," whenever the Roaring Camp train would pass by our house, and we would run out to wave at the tourists. She was crazy about Thomas the Tank Engine. While most Americans rarely travel by train, little Maya, Daniel and I took the train to DC for her first Christmas. And when she was two years old I got us a month pass on Amtrak so we went up to Seattle, Montana and Pennsylvania by train.

So when I heard that Turkey has trains, I decided I would leave my friends with the rented van, and strike off on my own by train. My new friend Gwenn also likes trains, so she decided to join me. We've been having a great time, first on a 5-hour trip from Kars to Erzurum, where we spent a day. Then we took the 20-hour overnight train to Ankara where we're staying in Phyllis' apartment while she and Marna are still exploring northeastern Turkey. Phyllis wasn't very encouraging about the quality of train travel in Turkey, but Gwenn and I were pleasantly surprised. The train is comfortable, scenic, and very reasonable priced.

Bitlis, Turkey on the way to Lake Van 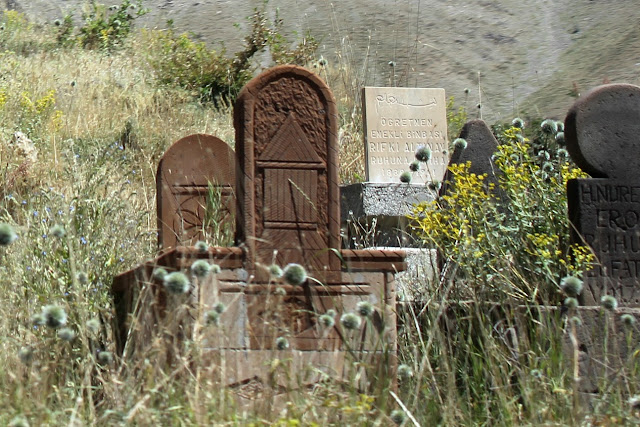 Posted by Carole Chelsea George at 11:56 PM No comments:

We stayed in Diyarbakir for two nights, which seemed like a luxury after packing up and moving every day from town to town in southern Turkey. It reminded me of the old movie from the 1960s called "If It's Tuesday, This Must Be Belgium," about Americans traveling by tour bus through Europe, capitol city to capitol city, trying to see everything in one week.

The "ogretmenevi," as the teacher's hostels are called, was filled when we arrived late in the afternoon in Diyarbakir. So we checked out a 4-star hotel nearby. Our driver Rafet had some kind of connection there and we ended up getting a room for us four women, and a spare room for Rafet for $115 altogether. But the best part was the pool, considering the temperatures were 110 degrees at midday, and the best breakfast buffet so far.

Gwenn and I went out one evening walking through the old walled city, taking pictures of the people. I felt like the Pied Piper when the kids started following us around. The next morning I got up at sunrise and climbed on top of the old wall to walk around the perimeter of the ancient city, and took more photos. I also went swimming both days we were there.

The city walls were originally built in the 4th century AD, and were modified several times after that. It was built on a cliff above the Tigris River. This gave good protection to the villagers who lived inside the walls.


Posted by Carole Chelsea George at 11:24 AM No comments: