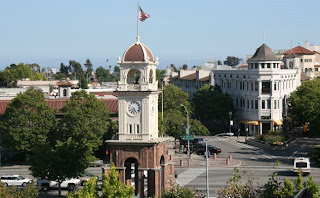 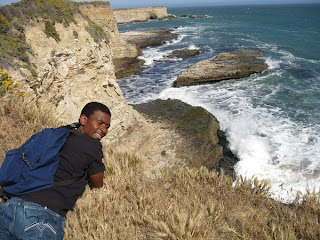 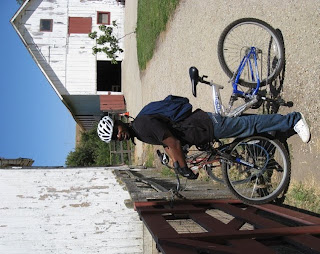 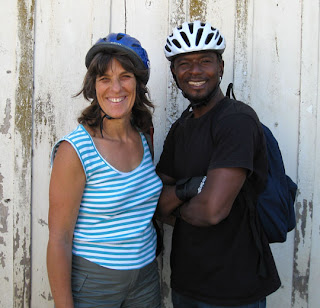 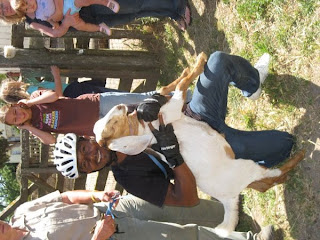 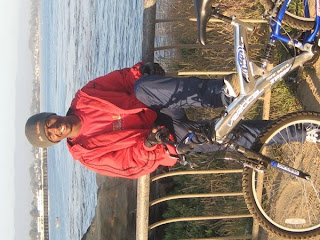 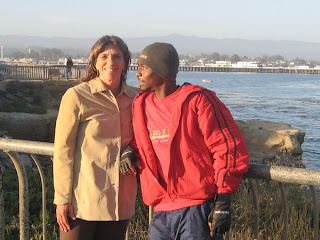 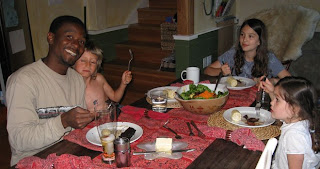 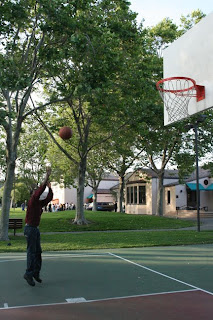 Andre's been in Santa Cruz a little over two weeks and already he's in love....with Santa Cruz. One day on a bike ride along the coast he turned to me and said, "You were right. You do live in paradise."

I was afraid that I'd bragged about Santa Cruz too much and therefore he'd be disappointed when he got here. Like when a friend tells you about the best movie ever and then when you see it, you think, "that wasn't so great." But if the film gets bad reviews, you might be pleasantly surprised. With Santa Cruz, no words can describe how beautiful it is. You have to come here to fully appreciate it!

One of the first things we did was enroll Andre in Santa Cruz Adult School's ESL classes. The free classes are offered 20 hours a week. Because the session was almost over, the principal started him in Level 3, but he'll move to Level 4-5 for the summer session.

Since he has English class in the mornings, Andre's hoping to work the afternoon/evening shift at Marini's Candies with our Mexican friend Gabriel. Gabriel is from a tiny village called El Limon, Jalisco and studies at the university in Guadalajara. He comes up to Santa Cruz every summer to work at Marini's so he can buy computers, cameras, video cameras, etc. for his budding film making career.

Another activity that Andre loves is playing on his new soccer team "San Paulo." He played his first match on Sunday, finishing 1-1. On Tuesday and Thursday evenings they practice against other teams. Everyone else on the San Pablo team is from Mexico or El Salvador. They're teaching Andre lots of new Spanish vocabulary, but not words you'd repeat to your mother.

Our favorite past time is riding bikes together. Andre got a nice mountain bike through craigslist, so we can ride along West Cliff, up to Wilder Ranch, down to Capitola Beach, and around town. The weather has been perfect. Even Andre, the Caribbean man, has ventured out in just a t-shirt lately. One-by-one, we've been running into friends of mine who have been waiting to meet Andre, but he has no idea how many more fans he has in town.

Yesterday, while Andre was in ESL class, I went to Maya's 5th grade graduation at Westlake Elementary School. It was wonderful to see all her friends and their families, even though it was hard too. Volunteers from each of the three 5th-grade classes gave speeches. I was so touched when Jade and Larisa mentioned how they wished their friend Maya George could have graduated with them. Another touching moment was when the principal Mr. Clyde Curley gave me a "Class of 2008" wristband. I held it together until I went down to the Life Lab and saw Maya's memorial yellow rose bush in full bloom.

Today Andre and I leave for Southern California. We'll spend the day being tourists along the way -- Solvang, Madonna Inn, Santa Barbara -- and stay the night with friends in Ventura. Then tomorrow we'll stop at Venice Beach (no, not Disneyland this time) on our way to San Diego. I've already know all of Andre's family and friends. Finally, he gets to meet my dad and his wonderful wife Judith, along with the Charfauros clan (my ex-husband's family), and other lifetime friends in the area where I grew up.

Maya's 11th birthday is June 17, so hopefully Daniel will make it down in time to join us. We're going to Sea World in honor of Maya. Daniel had planned to ride down with us, but he's finishing up a big job and couldn't get away in time.
Posted by Carole Chelsea George at 9:28 AM