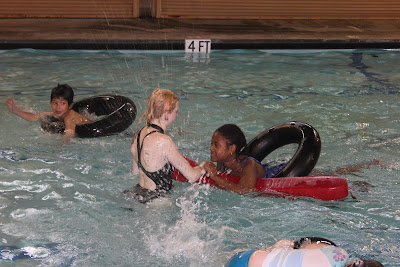 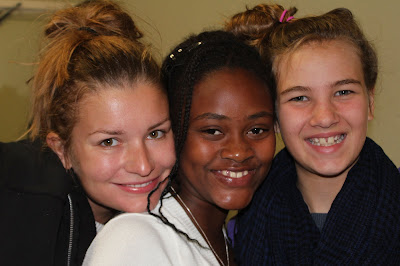 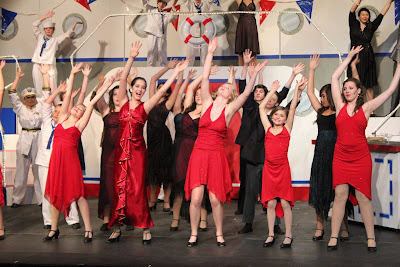 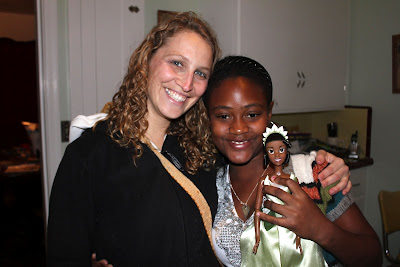 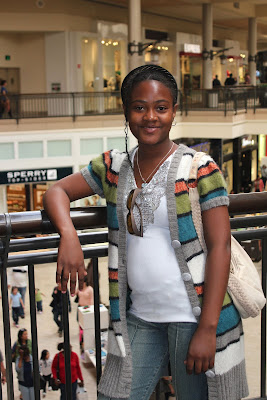 Mardochee has been in the U.S. nearly 3 months. In many ways, she's become Americanized already. And in other ways she's still very Haitian.

We're actually getting along better and better, now that she's getting used to a more active lifestyle. In Haiti, it's rare for women or girls to go out after dark. I was disappointed the first few times I invited her to go to musical theater with me because she acted shocked at the idea and insisted on staying home instead. I thought at first she didn't like theater, but then I realized it was the night thing.

Lately she even wants to go up to the university in the evenings while I play racquetball. She enjoys watching from upstairs. UCSC has six courts, so sometimes in addition to racquetball there are cheerleaders practicing, martial arts classes, dance classes. After I play my matches, I spend maybe 20 minutes or so letting her hit the racquetball on the court. She's quite athletic and coordinated. If she had good vision she would be a very good racquetball player. At first she was only able to toss the ball in the air and hit it. Now she can bounce it and hit it pretty consistently.

On Friday night, Mardochee watched her first musical, called "Anything Goes" by Cole Porter, and loved it. We invited several friends to go with us. I was surprised by how easily Mardochee caught the jokes. Her ability to comprehend so quickly continues to amaze me. The main confusion she still has is between "he" and "she" and "his/him" and "her/hers" because in Haitian Creole it's all covered by one simple word "li." I know everyone keeps saying that all kids learn languages quickly, but I think she is way above average on this.

Yesterday I took her to a big shopping mall with me because I needed to go to the Apple store and sadly they don't have one in Santa Cruz. San Jose is about 40 minutes from our house. We arrived late because I missed my exit, then had trouble finding a spot in the parking structure, so they had to reschedule me for 45 minutes later. We walked around the mall and let her look around. She was most interested in shoe stores. Since I've been very free and generous in the thrift stores with her, I think she thought she could just find some shoes she likes and go home with them. I had to explain that these are too expensive. She also didn't realize that they have a back room with all the sizes. She kept looking for a shoe that would fit her, like in the thrift stores where what you see is what you get.

I took her into the Disney store, even though she doesn't know what Disney is. I couldn't resist buying her a Tiana doll that sings when you push a button on her hand. Neither of us has seen the movie "The Princess and the Frog," but I like the idea of a black princess.

When we were driving down to San Diego last weekend, we passed Disneyland. For some reason, I still get a kick out of spotting the tip of the Matterhorn over the hotels and other buildings. Our two riders and myself were surprised that Mardochee had never even heard of Disneyland. At least that's one expense I won't have to make for a while. I haven't even taken her on the rides at the Santa Cruz Boardwalk yet since the rides are $3 each now, but only 70 cents on Monday and Tuesday nights in the summer. Besides, we've been so busy doing all kinds of new activities for her.

Mardochee also officially joined the church choir yesterday. They had a 2-hour practice, but she missed the first half hour because of her swimming class. We can walk to the pool and to church. I love living in downtown Santa Cruz for that reason. Mardochee doesn't really like walking, so I bought a tandem bicycle. Now we can get around town and go back and forth to school more easily. We haven't ridden along West Cliff Drive yet, because I'm waiting to try it out when it's not too busy, like not on a sunny weekend. Bikes and pedestrians, dogs and strollers, skaters and joggers all share the same path that winds along the ocean cliffs. It's really beautiful, one of Santa Cruz's many treasures, so I'm sure she'll enjoy it when we do.

Today she sings with the church choir, so that means we have to arrive early. Usually, I let us wander in maybe 15 or 20 minutes late since it's a 2-hour service, longer than I'm used to. I do love the music and the pastor's sermons, but sometimes all the church announcements get tedious. And they don't pass the basket; instead they make everyone line up and go in front of the congregation to drop off your offerings. New folks have to introduce themselves, but luckily we don't have to do that again. I liked it during the holidays because they took the kids out halfway through the service to go to a room next door and work on their Christmas program and invitations to Jesus' birthday party. Mardochee sang "Oh Holy Night" in French au cappella by herself in front of the whole congregation for the Christmas program. I was so proud I cried.

One of the smartest things I did was trade a room for a nanny. I advertised in craigslist a few months ago and was surprised by all the wonderful responses I got. The very first woman we met, a brilliant Polish traveler with a great sense of humor named Ewa (pronounced Eva), won both of our hearts. I had invited her to meet us at an art gallery during a fundraiser for Hope Art Haiti's trip to visit Nadine's orphanage in Port-au-Prince. Ewa and Mardochee did some drumming together along with the live band.

I offered Ewa the job on the spot, then the next day I got a response from a friend of a friend who I already knew and liked. Carly, a young Argentinian college student, was housesitting for our mutual friend for a month or so, then going down to LA for a while and returning when school starts in February. So Ewa had the great idea for her to stay with us for two months, then let Carly take over in February. At the time, I think Ewa thought she'd be traveling on at that point, since she's been touring the US.

But as it would happen, Ewa fell in love with Santa Cruz and we fell in love with her. We hated to see her go and she didn't want to leave either, so I found her a similar set-up with another friend, a single dad who lives nearby and could definitely use some help with cooking, cleaning and babysitting. Meanwhile, Carly is settling in and working out really well. So our family has just gotten even larger. I'm so happy to see all the love in Mardochee's life.
Posted by Carole Chelsea George at 8:12 AM