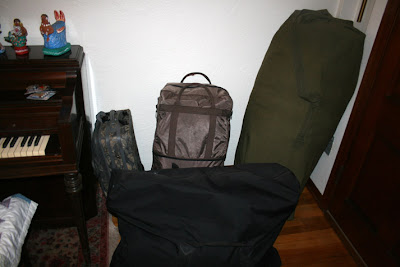 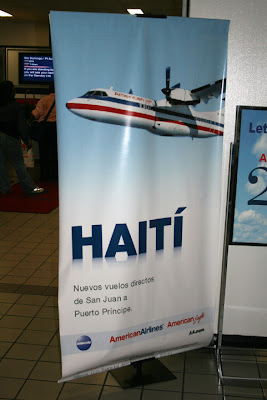 I had a week to get ready for my trip after Andre left on March 8, which was barely enough time.

Getting the baggage together was the most important job. The big green duffel weighs 52 pounds and has our third dome tent, a tarp and an extra fly cloth for a tent that disappeared years ago. The medium-sized bag next to it also weighs 52 pounds. They're supposed to be 50 max, but I found out when I took Andre that they'll let a couple extra pounds slide and every pound is important to us. The small one next to the piano is my 40-pound carry-on which holds two air mattresses, nuts, tools, cans of tuna, and a jar of Nutella. The big black bag weighs 73 pounds which cost me $100 for extra and $50 for 20 pounds over. It contains four more tents, an extra tarp, more food, medical supplies, mosquito netting, shampoos, toothbrushes, toothpaste, soap, etc. etc., much of it donated by friends. My second carry-on has my laptop, cameras, rechargeable AA batteries and charger, an assortment of flashlights, a solar-powered backpack for recharging cell phones and AA batteries, and fresh-baked chocolate cookies at Andre's request for his family to sample. Oh, and a few clothes for me.

At 3:00 a.m. on March 16, after just an hour-and-a-half of sleep I was picked up by my friend Moy. I wanted to arrive at San Francisco airport extra early because of all the baggage. Everything made it on except some screwdrivers and Nutella in my carry-on. I should have known about the screwdrivers, but Nutella? They explained that liquids and creamy stuff like toothpaste 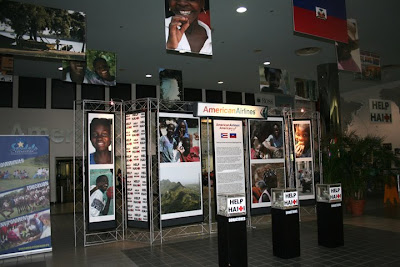 is verboten. The saddest part is they throw it in the garbage. 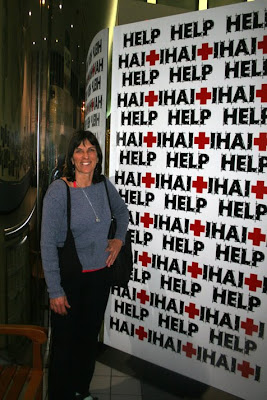 My entire trip lasted 24 hours with very little sleep or turbulence. Five hours to Miami, a two-hour layover, 2-1/2 hours to San Juan, Puerto Rico where I had a 12-hour layover. I was greeted by a huge Red Cross exhibit asking people to Help Haiti. I would like to think that Red Cross actually is helping Haiti and not just collecting donations for themselves. But I keep asking friends who have been to Haiti and they don't see much Red Cross presence of activity. I'll be looking myself. It seems they're too busy counting their millions. Like Alison Thompson in the documentary film "The Third Wave" says, the smaller the organization, the more likely that your money will actually get to the people in need.

At least I got some sleep at night, thanks to the security guard who showed me how to flip the chairs on their backs to use the cushions.

American Airline has added flights to Haiti, including the one from Puerto Rico that I was on. It's so weird because I used to be the only white person other than a few missionaries. Now flights are packed with Americans and other foreigners. There even was an Israeli on our flight with her own cameraman.

I had a nice conversation with a Lutheran missionary across the aisle in our propeller plane, originally from Canada but now living in Minnesota. He's been all over the world. It sounds like his organization works hard and does a lot of good. Talking to him, it's clear he's a 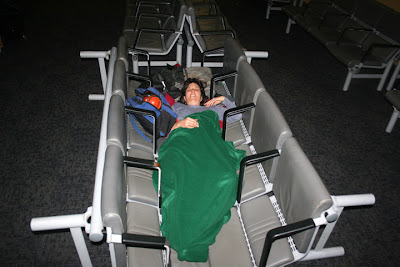 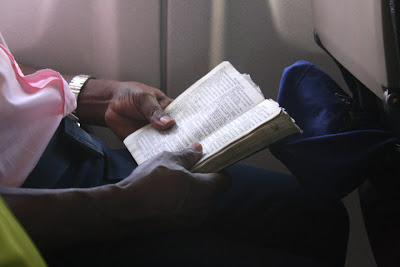 Christian, but he wasn't pushy about it. He impressed me with his fluency in Spanish and Quechua, the language of the Inca Indians in South America. He demonstrated the clicks in their language and how easy it is to be misunderstood. It reminded me of Thai, which is tonal and hard for English speakers to pronounce well.

Next to the Lutheran was an older Haitian man who has lived in the US for 27 years and still sports a thick accent. I'm not sure how ancient his Bible is, but it's definitely well-read...through most of the flight.

The first view of Haiti from the air is impressive, with its tall mountains peeking through clouds. The name "Haiti" means "Tall Mountains" in Arawak, the language of the indigenous people who once inhabited the island before European conquistadores killed them off.

As we approached Port-au-Prince it was easy to see the military and refugee camps. I didn't have a window 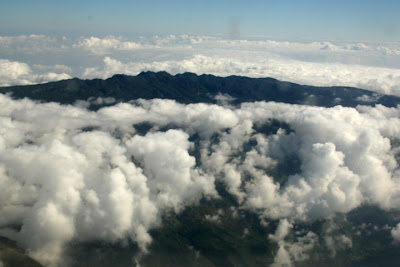 seat so I had to reach over my seatmate. Unfortunately all those shots are out of focus. At 8:25 a.m. the lighting was perfect. I hope Andre and I have a second chance on our return flight on April 7 in the late afternoon. 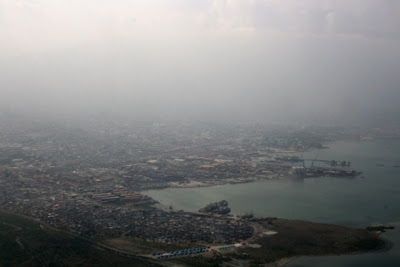 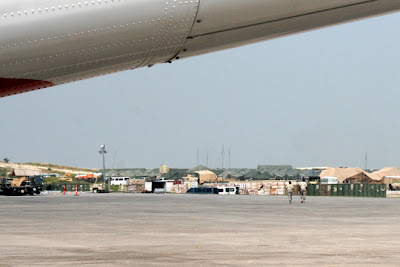 I braced myself for lost luggage and strict customs officers, but luckily neither happened. My luggage was handed off the plane quickly and the customs officer only asked me about the big duffel. When I said tent she waved me through.

Dependable Andre was there waiting, with his brother Johnny and car. We had to fight off all the helpers, looking for American dollar tips. Johnny's car was surrounded by a crew of window washers. Andre fought with them to get away, then ended up handing them some coins. The man in charge of the boys reminded me of Fagin in Oliver Twist.

The airport terminal itself had some big cracks, and right outside were some collapsed buildings. A long line of people waited for rice rations. U.N. soldiers making sure everything went smoothly.

You don't have to look for evidence of the earthquake. It's everywhere. I think what impressed me more was how much was left standing. You don't see those buildings in the news. Overall, Port-au-Prince looked like business as usual. For the western foreigner who are flocking in these days, it might look like poverty and chaos. But to me, it looked like the same city, with lots of rubble added. 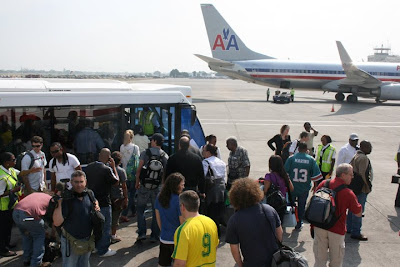 I guess from seeing so much news coverage and photos, I wasn't shocked by what I saw. Two months after the quake, a lot of the rubble had been cleaned off the streets and people are starting to go back to work. Schools will open next week.

It brought back memories of the 1989 Loma Prieta earthquake in Santa Cruz which I missed while traveling in Italy. But I got back a few months later to see rubble and destroyed buildings also. 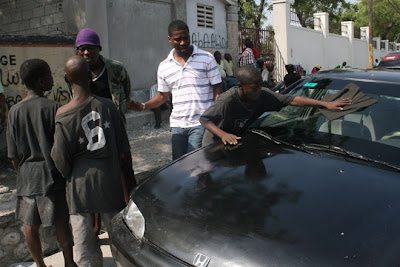 Posted by Carole Chelsea George at 11:03 AM

Thanks for this update. Kudos to you and Andre for all that you've done and I'm sure much more will be accomplished during this trip.

This on-line on line casino launched in 2022, and we’re excited to see the 온라인카지노 way it} grows with the growing reputation of cryptocurrency. RedKings provides bonus funds to new gamers with a max bonus of €100 and a low minimum deposit of €10. This welcome bonus also consists of 15 bonus spins on Wolf Gold, a popular slot sport by Pragmatic Play. The finest on-line gambling websites make inserting your bets simple and simple.