One month after the quake 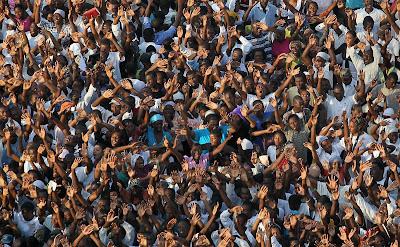 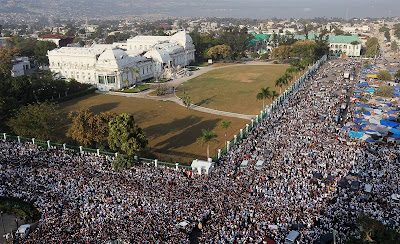 Today marks the one-month anniversary of the earthquake in Haiti. When Andre called his family in the morning they were unable to talk to him because of the National Day of Mourning and Prayer in Haiti. When he called in the evening they were still praying. Now they say they'll be praying for five days, then on Wednesday they will have a Celebration of Life, with music and dancing.

That also means the banks will be closed for five days. We been waiting more than a week already for the $2,500 I transferred from Bank of America to arrive in Andre's stepfather's account in Unibank. He won't even be able to check again until Wednesday or Thursday. I'm afraid we could lose the land that he picked out because they need 75% of the sales price to do the contract, another 10% for escrow and closing costs, and then the final 25% during construction. It's not like here where you put 10-20% down and have 30 years to pay the rest.

We also found out that the price of the land went up from $10,000 to $12,500. Actually, the price difference was probably a misunderstanding. Haiti has three different currencies: Gourde (the official money which is printed on the bills), Haitian dollars (1/5 of a Gourde, which is the price most Haitians talk about even though they don't exist in reality), and U.S. dollars (which are used for big prices, like houses, cars, computers). The U.S. Dept. of State -- see "Special Circumstances" has a great explanation of the three currencies in Haiti. They also warn you that ATM machines are incompatible with U.S. credit cards and generally out-of-order anyway.

I think Andre must have heard his stepfather say the price was $10,000 per centieme and the seller has 10 centieme that he won't subdivide. So Andre told me the price was $10,000 U.S., but the real price is $100,000 Haitian dollars. You have to multiple that by 5 to get the price in Gourde. Then you divide by 42 or whatever the current exchange rate is to the U.S. dollar. If the rate doesn't fluctuate too much, we'll be paying about $12,000 for the land, plus $1,200 for escrow and closing costs. The seller pays the same for closing costs.

I had a very pleasant surprise today. I got an email from Ronnie, the EMT from New Jersey who was on vacation in Port-au-Prince when the earthquake happened. The small hotel in Delmas (very near Andre's family) where he was staying was mostly destroyed in the earthquake, but they had a generator and some gasoline so he was able to get on the internet a little, even right after the earthquake. He was the first person in Haiti who I made contact with. I had hoped he could put us in touch with Andre's family. But he warned me he had to go back to Santo Domingo since he had no money or food, and the banks and stores were destroyed or closed.

Here's an amazing video that Ronnie shot on January 17, just five days after the earthquake, as he and some friends drove around the ruins of downtown Port-au-Prince: