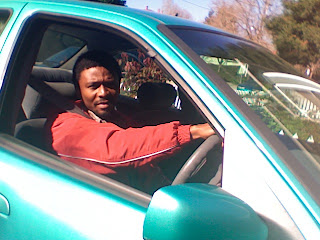 February 11, 2009 was the 11th anniversary of the finalization of Maya's adoption. It was also the second anniversary of her memorial party. And it's also the day that Andre got his driver's license. Mostly he still drives with me because generally we go together when we're taking the car. But in case it's raining, he can now drive himself to Adult School for ESL class. Or he can drive up to UCSC at night to work out in the gym by himself if I can't go.

So, WATCH OUT WORLD! There's another Haitian behind the wheel.
Posted by Carole Chelsea George at 3:58 PM