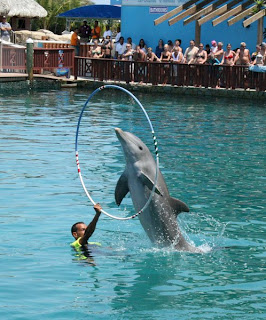 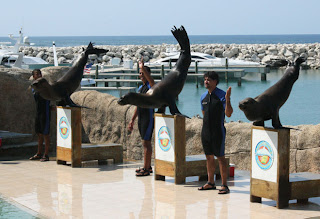 I wanted Andre's birthday -- April 23 -- to be a memorable day, so we splurged and went to Ocean World, which is located at the next beach over from where we're staying. If you've ever been to Sea World, you won't be impressed. But if you're from Haiti, it will really wow you.

Ocean World offers four 15-minute shows: Sea Lions, Dolphins, Birds and Sharks. The first three were very similar to many that I've seen before, at Sea World and other aquariums around the world -- cute and corny. But I'd never seen a Shark Show before. Since sharks don't do a whole lot, it was mostly a comedy show with 5 trainers and a group of "volunteers" who paid $45 each to feed the sharks in front of the audience and then swim with them later. Obviously, these sharks are well-fed ahead of time. They show no interest in or fear of the humans at all.

The shark show is conducted in English. At first the trainers try to scare the audience and the volunteers into thinking this is really dangerous. They talk about the sharks' teeth, killer instincts, blood, victims, etc. Then they proceed to pick up the sharks, turn them over, pet them, feed them, and make them snap. I stuck around after the show to ask a few questions. When I teased the trainer, saying it was more of a human show than shark show, he said that sharks are too lazy to do things like the dolphins and sea lions do. Somehow I don't think surfers in California would complain that sharks are too lazy.

The bird encounter was nice. A worker hands out bird seed so they'll fly down to your hands and head to eat. At least it allows for some nice photo opportunities, and a bit of bird poop on your clothes if you're unlucky. I'm always torn about these animal attractions because I have lots of friends who call it exploitation of animals for human entertainment and profit. But I remember what joy it gave Maya to be close to animals and it's hard for me to resist. At least I the tanks were large and the animals looked healthy, so I didn't leave Ocean World feeling sorry for the animals, as I have quite often in the 3rd World.

After we saw all the shows and posed for pictures with the birds, we walked over to Ocean World's Casino to have a pool-side lunch. Andre's fried fish was fresh and tasty. I ordered the shrimp salad with mango and avocado, which sounded delicious...until the grilled shrimp arrived on top of iceberg lettuce with cantaloupe. When I pointed out the difference, the server explained that avocado and mango are out of season. Same for lemon. I had to send back my citric acid "lemonade" and get a fresh pineapple juice. I would have liked to know ahead of time about the substitutions, but our server was so nice, we left a big tip.

The casino's pool is long and curvy. Andre and I enjoyed swimming in it. We had to go around the American tourists at a swim-up bar who were smoking, but other than that, it was really refreshing. We also sprinkled some of Maya's ashes off the end of the pier. When we got back to L'Oase we played an hour or so of racquetball. Definitely a memorable 31st birthday for Andre!

P.S. You can check out Ocean World Puerto Plata on UTube to see the highlights of the shows. Here's the link to the shark show: http://www.youtube.com/watch?v=NTbd3oufzhg 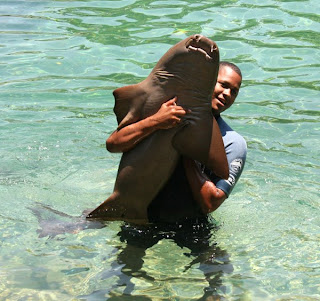 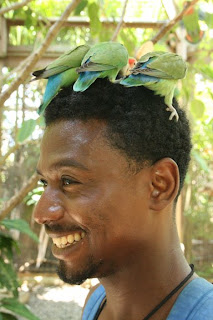 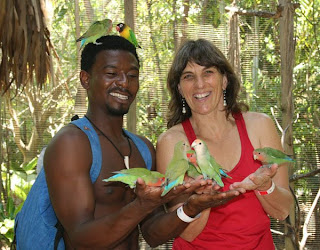 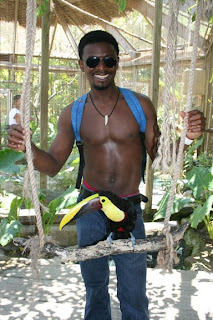 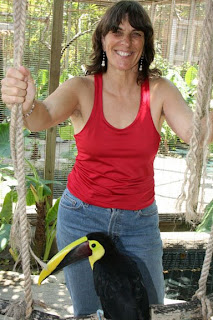 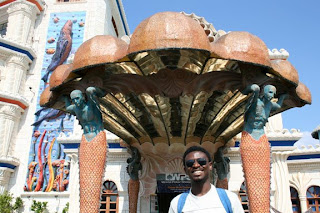 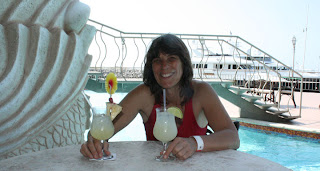 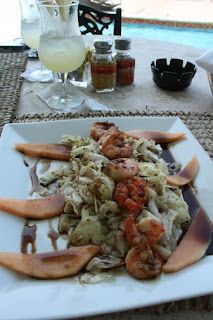 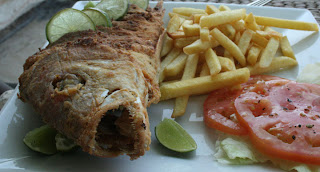