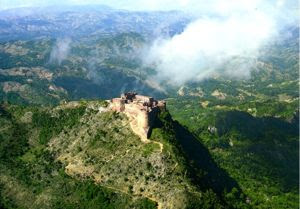 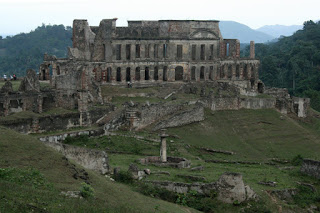 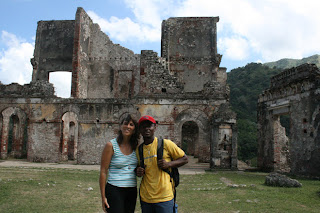 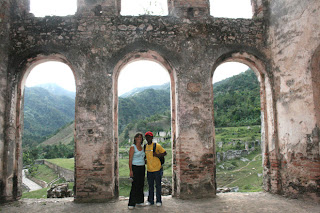 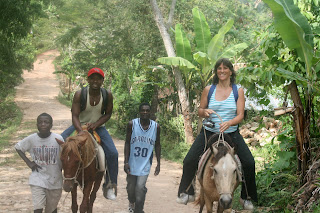 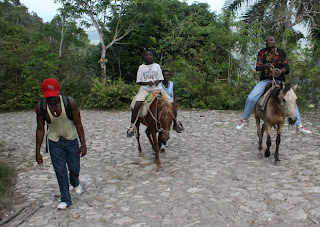 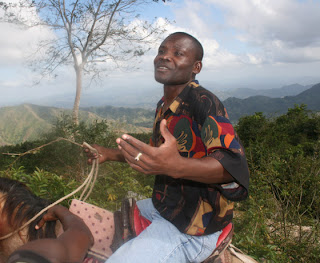 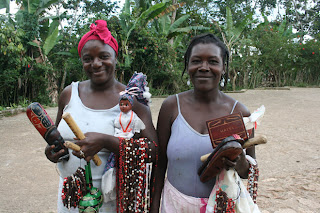 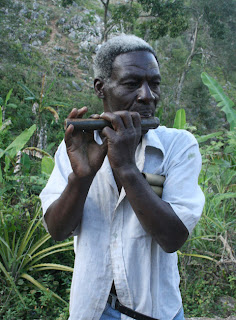 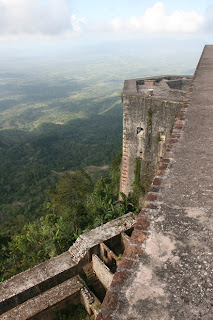 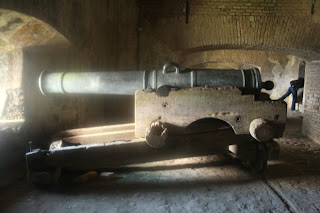 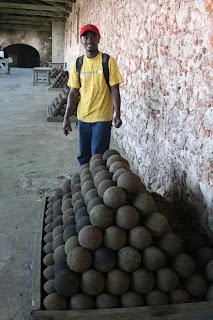 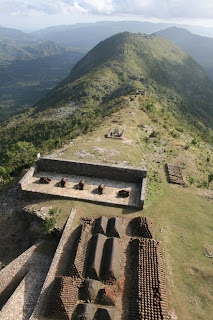 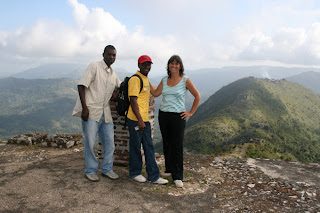 FACTS ABOUT LA CITADELLE:
World Heritage Site (1982)
Largest fortress in the Western Hemisphere
Built for King Henri Christophe from 1805-1820 by 20,000 enslaved workers
Designed to store enough food and water for 5,000 defenders for up to one year
According to Lonely Planet Guidebook, there are over 100 cannons and 50,000 cannonballs, still waiting for the return of the French.

La Citadelle is considered one of Haiti’s top tourist attractions. Supposedly, tour groups make a day trip from the Dominican Republic to visit this hilltop fortress, about 17 miles south of Cap-Haitien on the north coast of Haiti.

After going there myself, I don’t see how tour groups would manage. The Citadelle is definitely worthy of thousands of tourists, but I wonder how many actually make it. We arrived in the town of Milot, where the ruins of Christophe’s palace Sans Souci is located, around 11:00 a.m. and left, chasing the last bus, around 6:00 p.m. During that whole time, we saw only one group of three Haitian tourists. They drove four miles up the hill in a private 4-wheel-drive car, then rented horses to ride up the last mile or so. But even that would be too adventurous for most foreign tourists.

We went the rough route: walked from our Cap-Haitien hotel to the tap-tap station and crammed in the back of a pick-up to ride a mile to the bus station. There we sat in an old American school bus for an hour while they hustled enough passengers for standing room only. The road to Milot is full of potholes, so the ride is slow and jolting. Once there, we negotiated three horses and a guide to make the long five-mile journey up the cobblestone road to the mountaintop. Fortunately, the day wasn’t too hot.

The worst part for me was the way they treated the horses. I love horses, as did my daughter Maya. Andre also enjoys horseback riding. So we were looking forward to the trip. But when the old man showed up with his small, underfed beasts of burden, my enthusiasm waned. After mounting the horses and starting on our way, I was horrified to see a whole entourage of young boys with sticks, viciously whipping the hind legs of the poor horses.

It didn’t take long before I was in tears. The memory of Maya in Jarabacoa, Dominican Republic, fighting with Don Manuel to stop whipping her horse, came rushing back to me. I’ve been back to rent horses to the waterfall with Don Manuel two times since Maya died, and each time I have to fight with him to stop whipping the horses. But compared to these horses, his seem very strong and fit and willing to run. These poor animals, especially one that was dripping sweat and trailing behind right from the start, looked like they might not survive the ascent.

It took a while to persuade the sadistic old man that we wouldn’t ask for our money back if he took the weakest horse back down and let it rest. I would hope he gave it something to eat and drink as well.

I made it clear to the two boys who kept walking with us that there would be no tips if anyone hit the horses again. We really didn't need them at all, but they seemed poor enough to be willing to walk up and back in hopes of a tip. Andre and I took turns riding the other horse and our guide, Celestine, even got down and walked at one point so we both could ride for a while. We ended up letting the two boys ride the horses back downhill while we walked. It felt good to get some exercise and the joy of horseback riding had long faded.

Fortunately, the thrill of seeing the Sans Souci Palace and the Citadelle fortress were well worth any suffering. By the end, the $50 (plus tips) package deal we negotiated with the entrance office for 3 horses, guide, and entrance tickets seemed like a pittance for the two historic sites. I've experienced the same awesome feeling twice in the past – at Machu Pichu in Peru and the Masada in Israel – standing on a mountaintop, admiring an incredible human-made structure, and overlooking the world below. From La Citadelle, we could make out the city of Cap-Haitien and the Caribbean Sea. I’ve heard that on a clear day you can even see Cuba 90 miles away.

Our guide Celestine spoke to us in English – sort of – but the funny thing was, Andre could understand him and I couldn’t. His strong accent and sketchy vocabulary and grammar were familiar to Andre, but not me. In fact, when I played back the video a few days later, at first I was wondering what language was being spoken. One of the few things I did understand were that “Christophe was died in 1820” and I finally realized that he was talking about a “cistern” not a “system.” Compared to the research I’d done ahead of time, Celestine had his facts all scrambled. But who am I to tell a Haitian their history?

Another bonus of the journey up and down the hill was the chance to say “Bon Swa” to the villagers. Many of them ran up to us to sell handmade crafts. I broke down and bought a bunch of seed necklaces and a bamboo flute. The vendors let me photograph them with their wares. We bought white bread and some fried stuff along the way for Andre and our companions, but I chose to wait for dinner -- which we ate 12 hours after breakfast.

All I kept thinking, the whole day, was how happy I was that we didn’t take Andre’s Aunt Miche with us after all. On the overnight to Kenscoff with us, she packed her iron, five changes of outfits, several pairs of cute little shoes, and an array of hair ornaments, make-up, and toiletries. She never would have survived La Citadelle, as much as she'd wanted to come along.
Posted by Carole Chelsea George at 4:50 AM

Sounds like an awesome trip. I'm also planning a trip to Haiti. I'd like to stay in northern Haiti and visit La Citadelle also. Do you have any advice on where to stay? Any other information like tour guides and beaches would be appreciated.