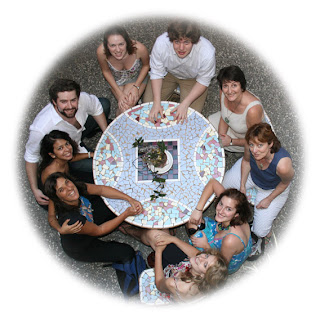 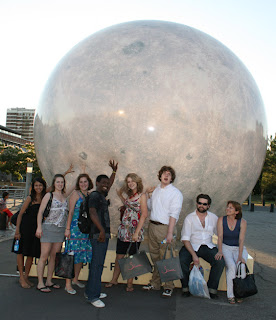 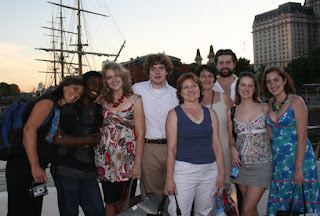 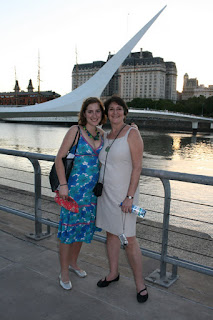 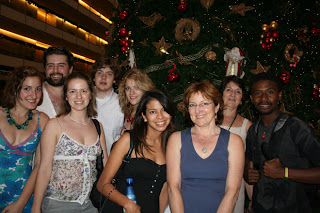 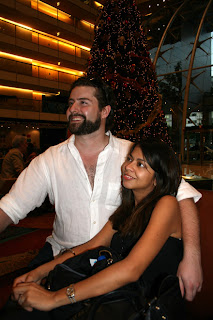 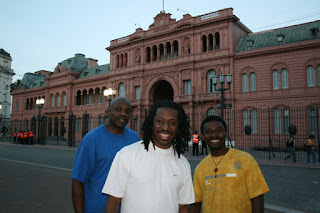 PHOTO CAPTIONS: 1. My cousins Steffi, Julie, and all their kids greeted us at our hotel, 2. Andre and my cousins, 3. On the Dancing Lady Bridge over the Rio de la Plata, 4. Steffi and her daughter Alex in front of the bridge, 5. At the Hilton Hotel, 6. Jessica and Jason who married in Puerto Rico Aug. 6, 2006, 7. Our friend Hubert in white, with his cousin Alfonso (L) and Andre (R) in front of the Casa Rosada, national palace.

Andre and I arrived in Buenos Aires in the early afternoon on Dec. 28. I checked email and found an invitation to celebrate my cousin Julie’s 53rd birthday the next day. So after settling in at our favorite hotel in the San Telmo district, we went around the corner to check in with Hubert and his cousin Alfonso. They had a rooftop suite at a youth hostel, very modern and roomy, with a terrace looking down on Chile Street.

We invited them to cruise the Florida pedestrian shopping area, which is always lively with street vendors and entertainers. On the way we stopped at the Casa Rosada where the casino workers were protesting. Police in riot gear were lining up in case the crowd got out of control. It seems like there are always political protests in Buenos Aires -- and lots of political graffiti.

The next day, Hubert and Alfonso invited Andre to hang out with them for several hours. I felt like a mom whose kid goes off to preschool for the first time. What to do first with my precious free time? I didn’t know whether to spend the whole time walking or writing. So I did both. I had hoped to go to a travel agent to get our tickets to Rio, but every agency that I was passed was only open weekdays. So I had to do it online.

That evening, all 8 cousins descended on our hotel at once: Steffi and her daughter Alex, Julie and her three kids Jason, Gannon and Martin, Jason’s wife Jessica, and Zack’s daughter Lily. What a wonderful surprise. We took lots of group shots of the historic occasion. Everyone was looking so great. We Bronsteins don’t get older, we get better. Julie, who resembles Meryl Streep and just turned 53, doesn’t even have a wrinkle.

Jessica and Jason were married on August 6, 2006 in Puerto Rico. Their wedding provided Maya with a final family reunion. The next day we flew to Santo Domingo and met Andre. I stayed with J&J in their Manhattan apartment on my way back from Dominican Republic last April.

Gannon is the reason everyone ended up in Buenos Aires for the holidays. Just 18, this is her first solo trip abroad. She’s been living in Argentina for 6 weeks now, with plans to stay another couple of months, and maybe travel around a bit after finishing her volunteer work as an English teacher.

Andre was a bit overwhelmed by the masses of new relatives. Like I’ve said before, I’m only child so my cousins are like siblings to me. Zack’s the oldest, then Steffi, Julie and I’m the baby. Everyone was so nice to Andre and took turns talking to him as we all walked along the riverfront. By 9:00 p.m. it was just getting dark. They were ready to hop into cabs and go out to eat in the ritzy Palermo district. Andre and I decided to walk back to our hotel instead. We’re still not used to these late night hours in Buenos Aires.
Posted by Carole Chelsea George at 12:04 PM