Arica, Chile at the Bolivian border 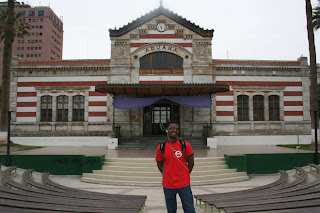 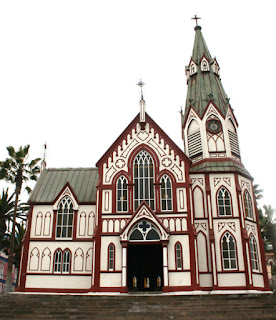 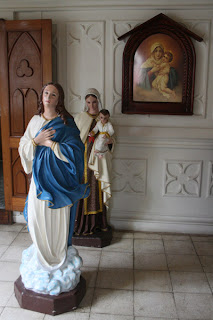 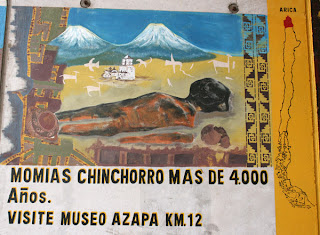 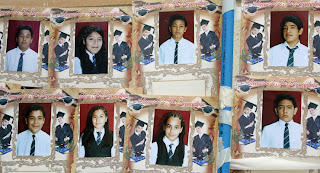 PHOTO CAPTIONS: 1-2. Andre in front of the old customs building in Arica, 3-4. San Marco church, 5. Arica Mummy Museum - one of many sights we didn't have time to see, 6. Graduate photos.

Arica is a sweet little town at the northern border of Chile. It has a cool pedestrian zone, a nice waterfront, historic train station and customs building, a hilltop to climb, mummy museum, etc. Unfortunately, we didn't have time to see much because we spent most of the day trying to get my Bolivian visa.

At one point, it looked like we were stuck here until Monday when the banks opened. We'd been back and forth to the Bolivian consulate several times during the day. Each time they asked to come back later, always promising that I would have my visa today. First, something was locked and no one had the key. Next, there was no communication with La Paz. Then, the consular had to take a break to eat. By then, the bank had closed that we were supposed to deposit the $100 fee. In the end, La Paz said it was okay to take the money in cash, which I gratefully paid.

All this is in retaliation for expensive tourist visas to the U.S. Brazil started the trend and I paid them $100 even though friends have traveled for years to Brazil without needing a visa. The new requirement for Bolivia went into affect Dec. 1. But when Andre got his Bolivian visa at the consulate in Montevideo, the consular asked me my nationality and told me I didn't need a visa. This was late November and supposedly this change was approved in Sept. How is it that the consular in Montevideo didn't know? I wouldn't have known either if my friend Jean hadn't written it in an email. So we went right away to the Bolivian consulate in Santiago. There we were given a list of requirements and told we could get the visa in Arica at the border since we were in a hurry to get going.

Then we get here to Arica and find out I'm the first one for them to process. This consular was mad at the consular in Santiago for passing the buck to her. But I'm still mad at the first consular in Montevideo who either didn't know or pretended she didn't know.

I'm feeling really stupid for being so determined to go to Bolivia at all. It cost us two yellow fever vaccinations and certificates ($40), Andre's visa $30, my visa $100, 2 first-class 29-hour bus tickets from Santiago ($280), and 2 flights from Cochabamba, Bolivia to my cousin's house in Puerto Montt in southern Chile $1200. That's not counting our travel inside Bolivia. I'm still somehow hoping we can go to at least Potosi or Sucre on our way to Cochabamba for the World Juniors Championships. Today was opening day of the tournament and the president of Bolivia Don Evo Morales was supposed to be there. I would have loved to be there for that. How often do you have a chance to see a world leader in person?

Had I known everything I know now, I would have turned south instead of north from Santiago and gone straight to my cousin's house, maybe even checked out Patagonia where our friend Jean is in heaven right now. But no, I had to be Don Quixote and insist on doing something that everyone else said was crazy. Well, now I believe them.

Having said that, we have an 8-hour bus ride over the border into Oruro, Bolivia. Hopefully, everything's that can go wrong has already gone wrong...
Posted by Carole Chelsea George at 3:55 PM