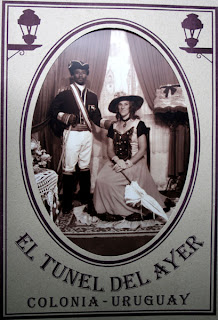 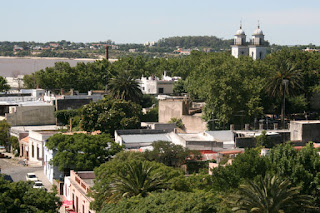 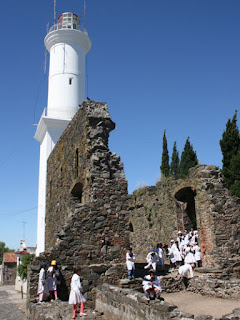 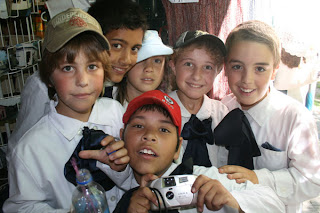 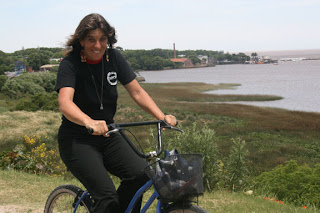 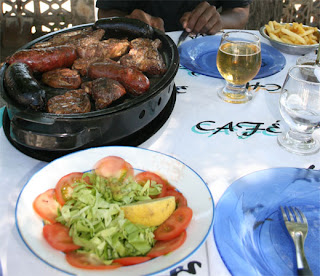 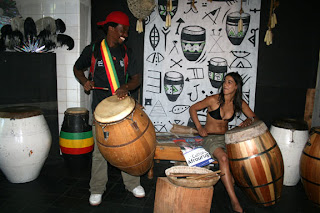 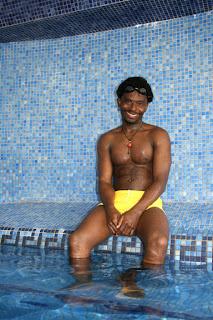 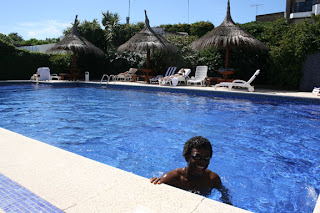 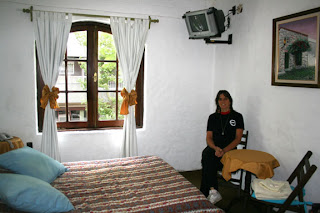 PHOTO CAPTIONS: 1. Andre and I dressed up as soldier and wife at the Tunnel Of Yesterday photo studio, 2. view of Colonia, UR from the lighthouse, 3. & 4. Uruguayan school kids visiting the lighthouse, 5. We explored the outskirts of town by bike, 6. The bullring built in 1914 and used only twice, 7. Complete grill plate, 8. Andre and drummer, 9. & 10. We enjoyed the indoor and outdoor pools at Hotel Italiano, 11. Our room at Posada Dos Pinos.

Andre and I spent 3 lovely days in Colonia, Uruguay. It's just across the Rio de la Plata (River of the Silver) from Buenos Aires, but with a population of 40,000 (compared to 13 million in B.A.) it feels worlds away. We stayed near the picturesque historic district in a fancy hotel with indoor pool, outdoor pool and gym for a special treat. On the third day we switched to a sweet little B&B for half the price. Our room in the B&B was actually larger, more charming, with lots of natural light.

We rented bicycles each day from a friendly older woman who kissed and hugged us when we bid her farewell. We pedaled along the coastal road called Las Ramblas, all the way to an abandoned Plaza de Toros. We later learned that it had opened and closed in 1914 after only two bullfights. Apparently, the builders failed to do their homework; It's forbidden to sacrifice animals in the town of Colonia. I knew I liked this place.

Like the Argentinos, the Uruguayos eat lots of beef, so Andre is happy. We tried different restaurants along the waterfront and they're all good. Uruguay is more expensive than Argentina, but still a complete grill for two with salad and French fries, was about $20. Uruguay is considered a providence of Argentina -- by the Argentines -- and in a way it's true. In both countries, everyone walks around drinking maté tea out of special wooden cups, using metal straws that are closed at the bottom except for pin holes so they don't suck up the herbs. It looks like alfalfa in hot water. I've tried it, but haven't felt the urge to drink two thermos a day as most Argentinos and Uruguayos do. Another similarity is they dance tango in both countries, although Buenos Aires is by far more famous for it.

Uruguay's population is even whiter than Argentina's -- 95%. The other 5% is mestizo or black. Everyone's been assuming we're Brazilian tourists since Andre's the only black person we've seen so far. We heard about "Candombe," a special Afro-Uruguay style of drumming. By luck, we stumbled upon a group of Candombe enthusiasts. They invited us in and gave us a demonstration and invited us to join in. They said up to 90 drummers play in the streets during Carnival, which lasts the entire month of Feb. in Uruguay.

Exploring the historic district on foot we made friends with a school group. I'm fascinated by their school uniforms -- both boys and girls wear white lab coats with big navy blue bows over their street clothes. They look like future doctors and scientists. They seem to go on lots of field trips because we saw several groups of school kids all around the historic district and picnicking on the beach. We climbed the old lighthouse for a gorgeous view of the whole town and jagged coast. One time we ran into a half dozen men with weed-wackers cutting vegetation along the river. I was surprised to learn that they work every day, doing a different section each time.

Like in Argentina, it seems like everyone smokes. I heard that the new liberal president of Uruguay made it illegal to smoke inside public buildings, which infuriated his supporters. Even with the new law we're inhaling a lot of second-hand smoke. Another controversy regarding the new president is his plan to open a paper mill on the jointly owned Rio de la Plata. Environmentalists on the Argentine side have been protesting because of the toxic waste created by paper mills. It will be interesting to see if he gets away with it.
Posted by Carole Chelsea George at 9:14 AM