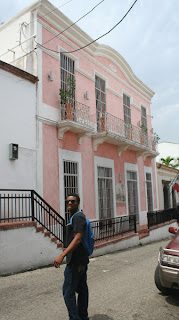 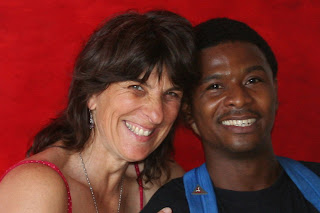 I have a lot to report this time. First of all, it looks pretty optimistic that Andre will be able to get a Brasilian visa for 90 days. We'll probably go from September to December when the flight prices come down. We could spend Christmas in Haiti, then maybe go to Jamaica in January. That leaves just a month or two to wait to pick-up his fiance visa at the U.S. Consulate here. At least it wouldn't be so hot in winter.
Since Andre quit his job in anticipation of traveling together, we had to go to a notary public to get an affadavit of support from me. The funny part was they had no proof of the income I stated. It took one lawyer to dictate the letter to the secretary, another to make photo copies of our documents and then we had to wait an hour for the notary to show up from some other office. I was relieved they only charged 1000 pesos (about $30) after the big production.
A few days ago we stopped by Hotel Atarazana where we first met on August 6, 2006, the day after my cousin's son's wedding in Puerto Rico. It was sad to remember how alive Maya was there, running up and down the stairs, posing for pictures on the rooftop, hanging out with Andre in the courtyard at breakfast time. Andre and I took some pictures there together for the first time. When we first met, I had assumed he was even younger than he is and tried to ignore my attraction for him.
On Monday we go for three days to a fancy all-inclusive resort in Punta Cana (about 3 hours from here in bus) to join our friends Antonia and Hubert. I introduced them in Cabarete in August. Hubert's been back and forth to DR more often than I have, but he can never stay very long. This will be Andre's first time in a fancy resort. He'll probably go crazy at the buffets. I hope I don't.
We've been playing racquetball every evening. I love it and Andre's getting better every time. There are a lot of good Dominican players. I also went to the gym with Andre and his cousin Patricio on Wednesday and we'll go again tomorrow. I don't usually like working out with weights and machines, but since I don't have my bike to ride around town, it was good to get more of a work-out than just racquetball.
Posted by Carole Chelsea George at 11:52 AM