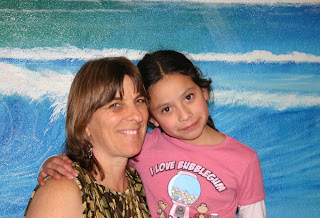 Today is May Day, 2007. In a week, I will be staying at the big house on Walnut Avenue, which Maya and I used to own. The new owners, Pam and Ray, will be in England for a month, so they invited us to housesit, take care of the cat, and even have Maya's 10th birthday party there. Maya was really excited about it.

As you probably know, Maya didn't make it to 10. She passed away on January 16, 2007 from a glioblastoma brain cancer. This Saturday, Daniel and I will be going to Lucile Packard Children's Hospital at Stanford for a memorial service for all the children who died of cancer in the past year. That same day will be a baby shower for little Reyna Becker who is being adopted by Debbie Malkin and family, but I won't be able to attend both. It's strange how life and death are intertwined.

Another strange thing for me is to be planning my life through May 2008. I'm usually much more impulsive about the future. And you'd think that after the rug got ripped out from under me on January 16, that I'd give up on making plans, since everything has changed now. Nothing will ever be the same. It could be easy to just give up on life. But that's not the kind of person I am. Even surviving the worst tragedy imaginable, my life goes forward: mi vida sigue.

Don’t set this in concrete, but here’s my itinerary as of today:

May 8 - June 15 Housesit on Walnut Avenue. (I already rented out my room and I'm staying in the attic.) This would be a great time for out-of-town friends to come stay with me. June 8-15 is reserved for the Chinn/Southard family. I will have 5 bedrooms and 3 baths on a half acre overlooking downtown Santa Cruz, walking distance to the beach. Please email me at chelseamaya@gmail.com if you can join me.

June 16 - Daniel (Maya's dad) and I take the train (Maya loved trains) up to Seattle, Washington to visit friends and family in WA and Vancouver, Canada. Maya's birthday is June 17 and we want to be out of town for that day.

late June - We drive back to Santa Cruz with I-Ju and John Alderete who will be attending a family function in San Jose. I-Ju's company www.ImageStreamDesigns.com created the beautiful DVD of Maya's life which I still need to help finish so we can burn 500 copies to give away.

early July - I'm taking Daniel down to Creel, Chihuahua, Mexico to introduce him to my friend Asuzena "Susi" and her two daughters Swanni and Lesley. Swanni is 3 days younger than Maya. We met them on our train trip through the Copper Canyon in August 2004. We spent 3 wonderful days with them. Since then, Susi's husband left her for a 15-year-old, so I think she deserves a better man this time.

mid-July - I'll be arriving in Santo Domingo to be reunited with my sweetie Andre. We plan to visit his family in Haiti before taking off for Germany. We'll travel for the next 6 months in Europe and northern Africa while awaiting his fiance visa to enter the U.S. I know that sounds drastic, but it was the only sure way to invite him to stay with me in Santa Cruz. My immigration lawyer was doubtful he could qualify for either a tourist or student visa since Haiti is such a poor country and Andre is not part of the small upper class.

A fiance visa is pretty simple. It costs $170, requires a fair amount of paperwork and takes about 9 months to receive. Once Andre arrives in the U.S., we will have 3 months to marry (around May 2008) or he has to leave the country. By then we will have known each other for almost two years. The weird thing is, when I arrive in July we will have known each other nearly a year, but only 3 weeks of that time were actually spent together. So it will be a real test of our relationship to travel for 6 or 7 months, together 24/7. We may have to cancel the application for the fiance visa. Who knows? Mi vida sigue…one day at a time.
Posted by Carole Chelsea George at 10:26 AM

Well, almost nothing turned out as I'd planned, which is why I usually don't plan. Daniel and I never took the trip up to Seattle or to Creel. He was not able to commit to anything, so I just decided to go back and be with Andre earlier, which was exactly what I needed at that point. Andre and I did visit his family in Haiti, but instead of traveling to Europe we went to South America because of the visa situation for Haitians. We could not get him a visa to any European country, but actually Chile and Argentina allow Haitians to travel there without visas. We did get him visas to Brazil and Bolivia and his were cheaper than mine since there's a little revenge going on against American tourists since the US charges so much for foreign tourists to get visas to our country. Andre needed a visa to Uruguay where our friend Gabriel was studying, which was a bit tricky, but we finally got him one.