I came here to visit a young woman named Janet who a friend of mine met through Skype. He liked her because she never asked him for money, although most of the women he meets online do. She's very pretty and 21 years younger than he is, so it's obvious why he likes her. But he wanted me to meet her and see what I thought.
I really like Janet and her family. They are all super nice and made me feel at home right away. The only thing that was a bit awkward is that no matter how much I insisted that I eat anything, they seemed very nervous about what food to serve. As soon as Janet picked me up at the bus station in Dau, and before we began our one-hour jeepney ride to her village, she took me into a supermarket and tried to figure out what I wanted to eat. I picked out a papaya and some bananas. She asked me if I wanted to buy some bread or potatoes because all they had at home was rice. I told her that Americans eat a lot of rice, but she didn't seem to believe me. Some of my favorite foods are Mexican, Thai, Chinese, sushi, Indian, and Haitian, all of which includes rice. I really don't eat much bread or potatoes unless I'm traveling in Europe.

Janet asked me if I like fish and I said yes, assuming that here on the islands they eat lots of fish. Little did I know, there was no fish to be found. We even drove in her father's jeepney about 20 minutes away to an outdoor market that was still open, but there was no fish. I told her mom that chicken is fine too, anything really. To prove my point I bought two skewers from a vender -- fried chicken intestines and fried quail eggs. Both were tasty, but I'm not really used to eating fried foods so they felt a little heavy in my stomach. Her mom finally gave up searching for fish and bought some rotisserie chicken to take home for the family. I felt so guilty because it seems they were all waiting to eat with me. I get the impression that most Americans, like my friend Art, don't like Filipino food.

Once we got back home it didn't take long to serve the chicken with some steamed rice. Everyone had a little saucer beside their plate with a mixture of soy sauce, lime, and chile, for dipping the meat. Only they didn't put chile on my saucer, assuming I don't like spicy food. I used to be married to a Guamanian and they do the same thing. My mother-in-law made her dipping sauce extremely spicy. i spotted another little dish of something in a red sauce and asked what that was. They told me it was sardines, but warned me it was spicy. Again, they seemed surprised that I liked it.

After the meat and rice, I was ready for some fruit. Only 2-year-old Gabriel joined me. Janet's mom wanted to know how to say papaya in English and was surprised it's the same word. I've been disappointed to hear so little Spanish mixed in their language. Only the words for trash, towel, spoon, knife, and bathroom sound like Spanish or close, to me. Janet's mom ate with her fingers, which probably explains why there is no native word for eating utensils. The language of Guam is called Chamorro and has a lot more Spanish mixed in. Even the numbers are uno, dos, tres, cuatro... on Guam. But not in Tagalog or the local dialect that Janet's family speaks. I'm hearing more English than Spanish, actually. For example, I heard her mother say "blah blah blah blah flashlight blah blah blah." Amazing that everyone in her family is trilingual in Kapampangan language, Tagalog, and English.

Janet has a sister and three brothers--Joel, Jimmy, Jay and Jovy. They all live at home with their parents. Janet isn't working or going to school, so she helps her mother cook and clean and take care of her four nieces and nephews. Only she and older brother Joel are not married or have kids. He lived in Taiwan for two years and worked for a company that makes CDs. But then he got laid off. Now he's hoping to get a job in another country. I liked his adventurous spirit. He said he's not thinking about marriage and he doesn't like to stay in one place too long. I know a lot of Filipinos work in the middle east. And in Hong Kong everyone had a Filipina maid. In the US they get jobs as nurses and caregivers.

Janet did a six-month course to get certified as a caregiver. She's hoping to get a work visa to London to work as a caregiver for two years there and then she hopes to move to the US. 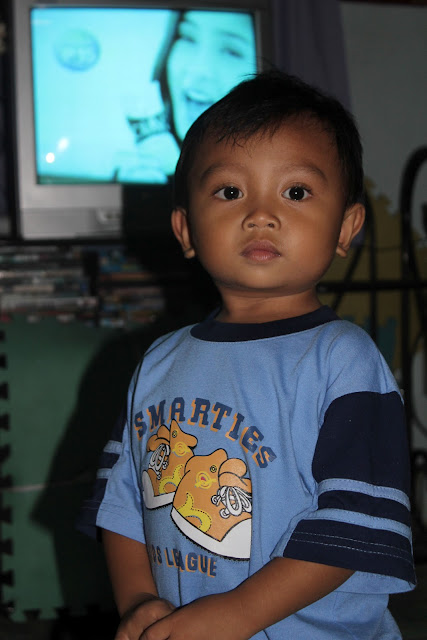 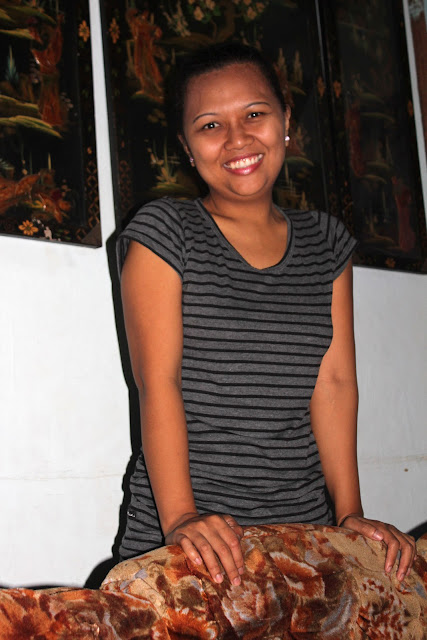