Not Such Good News 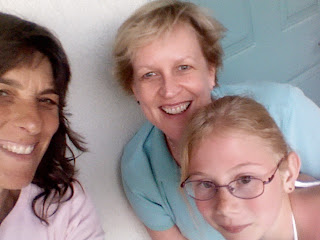 I spent the day with my junior high and high school friend Debbie Cave, her husband Alan, and daughter Devon who are visiting from Colorado. Debbie and I hadn't seen each other since graduating in 1975, but she hadn't changed a bit. We drove down the coast to the Monterey Bay Aquarium. I let them go in by themselves, while I did email and worked on my 2007 photo greeting card. I was also anxiously waiting for Andre to call.

He had to be at the US Consulate in Santo Domingo, Dominican Republic at 6:00 a.m. today. They called his name at 8:00 a.m. to turn in the documents they'd requested. Then they called him again to do his digital fingerprints. Finally, at 3:00 they called him in for the interview. They asked him lots of questions like how we met, do I have a daughter, what language do we speak to each other. Andre said that when he showed the young American consul our photo album, he got very excited to learn that we'd traveled together to five countries in South America.

Then he told Andre to sit down and wait again. When he called him back he told him that everything was fine except there was one doubt about his Haitian passport. He asked if Andre had ever lost his passport. He said no. He had one that expired and his current one. He had both with him, so I'm not sure what the problem is. They said they would have to email the consulate in Haiti for confirmation. But they instructed him to pay the $14 for courier delivery of the visa, so that part looks good.

I never imagined there would be a problem with Andre's Haitian passport. I had worried about my affidavit of support since my tax returns show a negative income, due to a real estate loss in 2003. I was afraid they would try and say that I couldn't support Andre. But from what Andre told me today, that wasn't an issue.

Hopefully, he will get the visa. We just don't know when. He's thinking just an extra week or two. But they told him not to make a flight reservation. I have to cancel the reservations I made to meet in New York on April 1-9. He reminded them that my birthday is April 2, but the consul said there was nothing he could do about it.

Needless to say, I'm bummed. I'm bummed because I still don't know 100% that he'll get the visa; I'm bummed because we have to wait even longer to be together again; and I'm bummed because my whole calendar is worked out around the April 1-9 trip to New York that isn't going to happen now. I could skip the whole idea of meeting in NY first and just reschedule him to fly straight through to San Francisco. But I was really looking forward to introducing him to all my friends and family in NY and NJ first. He also has an aunt in Brooklyn who he's never met and she's very anxious to meet him.

Debbie and her family leave early tomorrow morning to fly back to Colorado. I'll spend a good part of the day canceling and rescheduling everything. Then I go back to playing the waiting game.
Posted by Carole Chelsea George at 8:53 PM