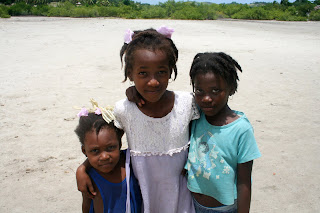 Our Haitian friend Junior just opened a phone calling center in Dominican Republic, right next to his house. He now has high-speed internet, so I'm taking advantage of it before Andre and I leave for Haiti tomorrow. We'll be lucky to find an internet cafe that has electricity, let alone signal. I remember how hard it was in last July. So don't be alarmed if you don't hear much from me in the next 3 weeks.

Here are our planned destinations in Haiti. It will be interesting to compare this list later with where we actually end up:

1. Andre's family in Port-au-Prince, the capitol.
2. The Canadian Consulate in P-A-P to turn in Andre's visa application.
3. The village of Duvall to see the abandoned farm of Andre's grandparents where he grew up. This should be the greatest adventure since transportation will be sketchy, up windy mountain roads.
4. Labadie Beach -- Supposedly, in the old days, cruise ship passengers who stopped in Labadie were often told they were at "Paradise Island" instead of Haiti.
5. La Citadelle, Haiti's premiere tourist attraction. This mountain top fortress was built for "Emperor" Christophe in the early 1800s, shortly after Haiti became the first independent black country.
6. Cap-Haitien -- Not really sure why, except that it's next to Labadie and
la Citadelle.

Haiti currently has a population of about 8 million people, and 1 million of those inhabitants are abandoned or orphaned children.

Haiti is a small country, sharing the island of Hispaniola with Dominican Republic. With a surface area of just 27,797 square kilometers (km2), Haiti is second only to Barbados as the most densely populated country (306 people per km2) in the Americas. Here are some staggering facts about the situation in Haiti:

* Haiti is the poorest country in the western hemisphere
* 50% of all Haitian households live in extreme poverty using the U.S. standard of a $1 per day
* The country’s per capita GDP, has fallen by about 50 percent to $332 in the last two decades
* About 4 in every 10 adults cannot read and write.
* More than 80% do not have access to clean drinking water.
* In rural areas only 10 percent of the inhabitants have electricity and just 3 percent have a telephone.
* The unemployment rate is highest in urban areas and runs close to 49%
* As many as 58 percent of residents in the metropolitan area feel unsafe “often or most of the time” in their own home.
* Haiti has one of the world’s weakest police forces. There are 63 police officers per 100,000 people, less than a quarter of the regional average of 283 per 100,000 and only a third of the average for sub-Saharan African countries.

You might ask me why would anyone want to go to Haiti? It sounds poor and dangerous. However, Andre and I had a wonderful time when I went to meet his family in July 2007. The U.N. forces are highly visible in the capitol and appear to keep the place safe and stable. We discovered gorgeous, nearly empty beaches in the south. I look forward to exploring the north coast this time. Haiti is warm and colorful and boasts some of the best folk art in the Caribbean. But best of all are the people. They're really friendly once they get over the initial shock of seeing a white person. I did get stared at a lot and some people were bold enough to touch my hair. But whenever I smiled, they smiled back even bigger.

Another thing I loved was seeing Andre in his native country. He loves visiting his family and old friends and speaking Creole. It's also nice to be a citizen instead of an unwelcome immigrant like he is here in Dominican Republic. However, his relationship with Haiti is definitely love/hate. One time he said to me that if he could be reborn as any nationality, he would still want to be Haitian. He has a lot of national pride and love of his culture. But on the other hand, even his mother told him not to move back because there are no opportunities. He gets more frustrated than I do with the lack of organization, the filth, the crime, the inability of the government to improve the situation.

I'm hoping that after traveling around South America, Andre will hardly notice the 6-hour Caribe Tour bus ride between Santo Domingo and Port-au-Prince. We take off tomorrow at 11:00 a.m. Wish me luck!
Posted by Carole Chelsea George at 11:21 AM