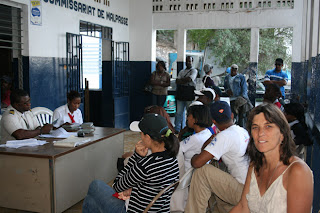 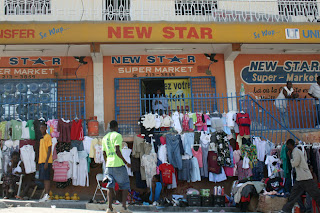 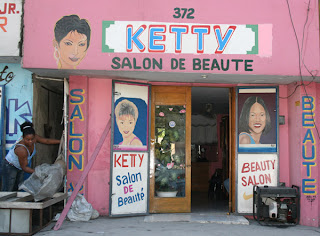 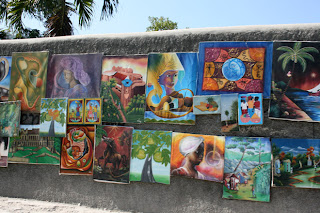 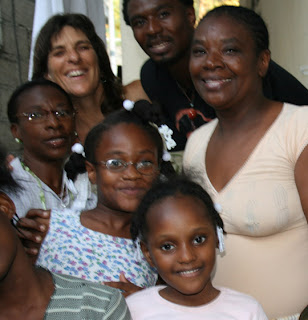 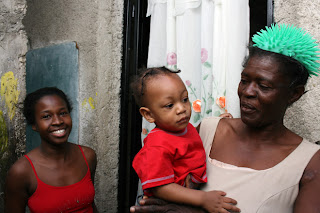 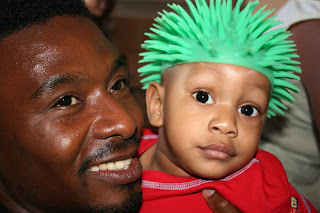 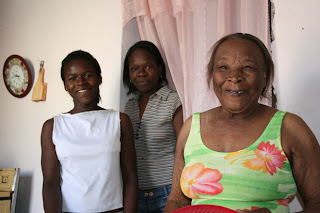 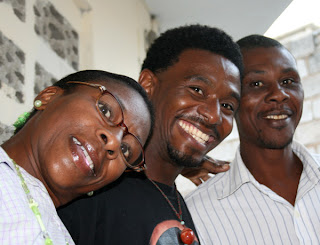 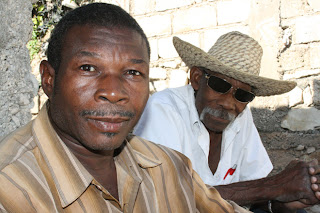 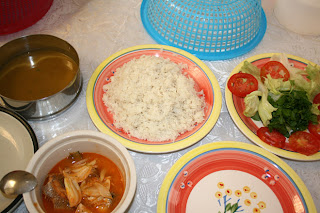 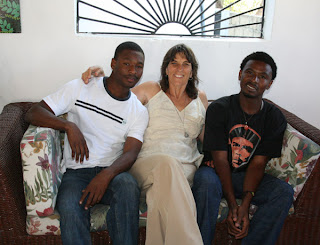 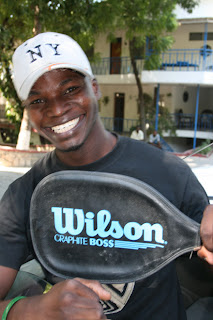 PHOTO CAPTIONS: 1. Crossing the border into Haiti from Dominican Republic, 2-4. Street scenes of Port-au-Prince, 5. a first-time photographer snapped this group shot. Aunt Miche, me, Andre, his mother, cousin Mardoche and neighbor Dada, 6. Cousin Johanne, nephew Joel and Aunt Josephine, 7. Andre and nephew Joel, 8. Cousins Aurore and Barbara with Grandma, 9. Aunt Miche, Andre, and mother's cousin Zaki, 10. Andre's Uncle Gilbert and a friend, 11. Lunch of Rice, beans, salad and fish, 12. Brother Johnny, me and Andre at a hotel which has an outdoor racquetball court, 13. Wilson our driver.

It’s nice to see all of Andre’s family again. They seem happy to see me too. I’ve been studying a book called “Creole Made Easy” so I can even say a few phrases to impress them and make them laugh. Mostly my broken French gets me by. However, a lot of the time, I’m just out of the conversation and lost in my own thoughts. Definitely not my style to be quiet.

His stepfather said I look even younger and more beautiful than last time. I’m not sure if he’s just being nice or if it’s because I’m tanner, a bit thinner, and my hair’s longer. Either way, it’s nice to be accepted. His mother gave me a Haitian-style dress. It fit me perfectly and even Andre said I look good in it. Mostly he likes me in long pants, even in this tropical climate.

My camera is a big hit, especially since I gave them a huge package of photos of themselves that I took in July. Before meeting me the family had few photos. Now Andre is the most photographed man in Haiti, according to Daniel. Maya was probably the most photographed child in the world. I grew up with photography since my dad was a “camera bug,” since before I was born. That’s why it’s frustrating at times to be in a country where my camera is worth much more than the average annual income, so I have to be careful about taking it out in public.

Last night we went to Carnival – not the big one that lasts three days next Sunday, Monday, and Fat Tuesday – but a warm-up for the bands. It was a madhouse, with 10s of thousands packing the streets around the National Square. I was hoping to see masks and dancers and people throwing colorful necklaces to the crowd, but I guess that’s next weekend. We’ll probably be traveling in the north by then. Andre kept trying to talk me out of going to Carnival, claiming it’s too dangerous. As it turns out, this is the first time in his life that he attended.

I was a little hesitant to bring out my camera or video. I asked Andre if we could get up on one of the platforms that are under construction still for next weekend. Andre’s brother Johnny is a police officer, so he used his connections to get us up next to the announcer’s stand. Perfect! I had a great time watching the action, photographing and recording it, all at a comfortable height. I noticed lots of video cameras in the crowds and no one seemed concerned. In fact, I was amazed at how little police presence there was. They bring out the riot squad for Halloween in Santa Cruz these days.

Port-au-Prince is my least favorite part of Haiti even though we end up spending a lot of time here to be with the family. There is almost no interesting architecture, it’s dirty, noisy, crowded, and traffic is crazy. We’re mostly dependent on finding a friend with a car and paying a fortune in gas to get anywhere. It cost us $20 to go to Carnival last night, for example. Today we walked to his folks’ house from his sisters’ where we stay. It wasn’t that far, but the heat makes it more torturous than fun.
Posted by Carole Chelsea George at 6:59 AM