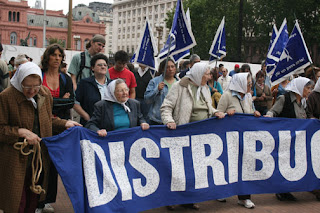 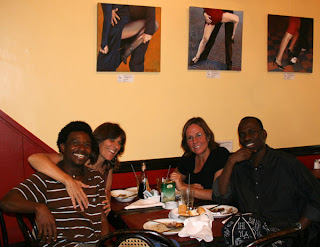 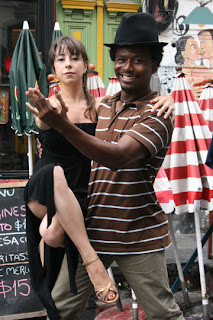 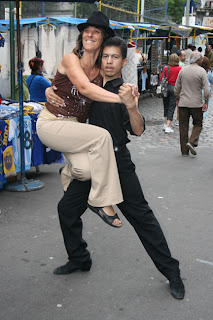 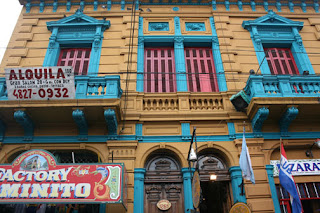 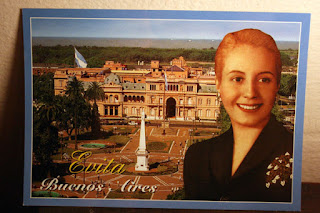 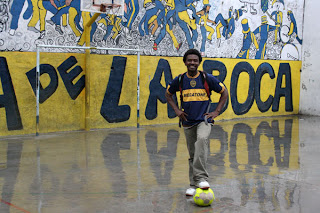 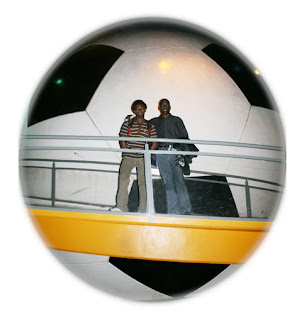 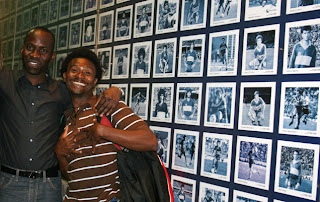 PHOTO CAPTIONS: 1. Chelsea joins the Madres of the Disappeared on their weekly march, 2. Jean, Ronald, Andre and I in a Boca cafe, 3. Andre poses with a tango dancer, 4. Chelsea attempts the impossible, 5. Colorful buildings of La Boca neighborhood, 6. Evita postcard in front of La Casa Rosada, 7. Andre in his new Boca soccer jersey, 8. Ronald and Andre in front of soccer-ball theater, 9. Photos of the Boca soccer stars.

Ah, Buenos Aires -- The Paris of Latin America. Yes, I remember Paris being dirty, but all this dog poop? After only two days I shouldn't be comparing the two cities, but somehow Paris seems so much more romantic and charming. Buenos Aires has beautiful Parisian architecture, outdoor cafes, omnipresent tango, incredibly posh antique stores, professional street musicians, but...when I look around at the people's faces and how they dress, I feel I'm in Southern California., San Jose, or New Jersey. Maybe hanging out in the Bohemian San Telmo district prevents me from seeing the "Porteros" (residents of Buenos Aires) as extremely fashionable and sophisticated. In fact, I saw a girl right off the streets of Santa Cruz with blonde dread locks, loose purple pants under an India-print skirt, a hand-knitted sweater and sandals. I felt right at home, but somehow cheated for having traveled so far.

After having said all that, it's been a thrilling two days. The highlight for me was 3:00 on Thursday at the Plaza de Mayo. That's when the Madres de los Desaparecidos (Mothers of the Disappeared) circle the obelisk in front of the Casa Rosada (remember Madonna singing from the balcony of the Pink House in the movie Evita?) carrying political banners and wearing their trademarked white kerchiefs, embroidered with the names of their missing children. They've been doing this for 30 years, so now they mothers are mostly in their 70s or older, but just as strong as always. You would have thought this was breaking news the way people like me were photographing and videotaping them, and crowding around their table to buy buttons, books, and DVDs. Andre and I purchased lots of buttons as gifts and a DVD which tells the political history of Argentina and the story of the Madres de Plaza de Mayo. I had no idea that some of them had been arrested, beaten and disappeared too.

The Florida pedestrian zone reminded us of the one in Sao Paulo, which means great for street entertainment, people watching, and shopping. Andre bought a CD of a musician who plays Andean instruments to mostly American tunes. My favorite tracks are Sounds of Silence and Don't Cry For Me, Argentina. Andre also enjoyed an older, chubby guy with wire-framed glasses who played Proud Mary, Stuck in Lodi Again, and some other song by Creedance Clearwater Revival. Again, I had to remind myself that I'm in Latin America.

Yesterday we were joined by two friends, Jean and Ronald. Andre hadn't seen Ronald since moving to Dominican Republic 4 years ago. They've been friends since childhood and had a great time catching up on friends and family back in Haiti. Ronald has been living in Buenos Aires for 7 months as a missionary and already speaks Spanish fluently. He guesses there are about 100 Haitians in Buenos Aires. That's more than I would have guessed, especially since you hardly see any blacks at all in this city, mostly newly immigrated Africans. Jean and I have met a few times over the years in Santa Cruz, but mostly we know each other through common friends. So we made a nice little foursome as we walked over to La Boca neighborhood. Jean had read in her guide book that it was kind of a dodgy area so she hadn't wanted to go alone. With two Haitian bodyguards, we had nothing to worry about, although people kept reminding us to put our cameras away.

Jean's just beginning a 7-month journey, perfecting her Spanish with home stays in Buenos Aires and Bariloche. Turns out she's 3 months younger than me, and Ronald is 8 months younger than Andre. So we did get a few looks throughout the day, two 50-year-old white women from Santa Cruz with two 30-year Haitian guys. Andre was thrilled to be chatting in his native Creole again with his good friend. Jean and Ronald also seemed to find lots to talk about, practicing their Spanish. Ronald was very attentive and charming, even after I informed Andre that Jean's a lesbian, although she admitted that even she can't help admiring the Argentine men with their pony tails, beards, and Latin lover looks.

The route along the way to La Boca was pretty nondescript lower-class, but once we got there I realized what all the fuss is about. The heart of the neighborhood consists of two colorful blocks, originally settled by Italian immigrants. We bought many postcards; my favorite is a compilation of brightly painted doors. La Boca is kind of vaudevillian in character, almost like a street circus. We got invited to pose for pictures with the tango dancers -- for a price of course. Everyone applauded afterwards (probably for our bravery). I'm afraid we looked more foolish than sexy, even though tango is all about sexy. I keep trying to imagine Reyna Lingemann's parents, former Bonnie Doon hippies, now in their 60s, coming to Buenos Aires every year for tango competitions. I'll have to remember to email Reyna and ask for some tips from her folks. When I couldn't get one of the tango poses right, an extremely gay guy stepped in and showed me how. He leapt into the male dancers arms and pursed his lips, but Andre failed to snap the picture. Luckily I'd given Jean my video camera and she got it.

By then, Andre was getting tired and thinking about a nap back at our once-glorious Victoria Hotel. I had to twist his arm to go to the Museo de la Pasion Boquense, the Museum of Boca Passion, a fancy name for a soccer museum. The four of us have reservations for Sunday's match at La Boca stadium, complete with beer and pizza (anyone want mine?), but I knew Andre would really enjoy the soccer museum -- and of course he did. He and Ronald went crazy taking pictures of the wall of photos and names of every Boca player ever. Then were soccer jerseys and balls, life-size photos of the biggest starts like Diego Maradona, before he got fat and arrested on drug charges. We saw a movie-in-the-round inside a soccer ball-shaped theater. Andre and Ronald took pictures of each other in front of the trophy cases, as proud as if they'd earned them themselves. Of course, Andre had to add Boca's #10 Juan Roman Riquelme jersey to his ever-growing collection of soccer shirts.
Posted by Carole Chelsea George at 5:12 AM