Still hoping to get out of here... 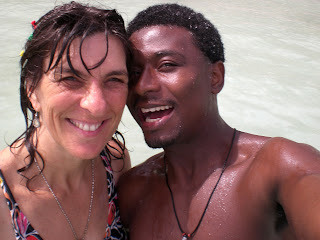 I'm scheduled to leave late Tuesday, Sept. 25, but I'd like to change it to the 26th if that's possible so I can get in the same day as my friend Hubert who is renting a car. He's only staying four days and will drive his girlfriend Antonia, me and Andre out to Nena's village near the Haitian border so we can see Nena's brand new baby Dewin Miguel. I asked her where she got the name Dewin and she said she made it up. I'm surprised because the letter "w" isn't used much in Spanish, if at all.

Nena's original due date was Sept. 30, so I thought I'd get there in time for the birth, but the baby wasn't in the right position, so they did a cesarian about a week ago. Andre says they always do cesarians in Dominican Republic to make more money. I spoke to Nena a few days after the birth and she was in a lot of pain. If the surgery was anything like Andre's mother's hysterectomy, I imagine she's going to be hurting for a while.

There's another little issue which hopefully will be resolved soon. I went in on Monday to get a mammogram since it's been over a year and I'm planning to be out of the country for six months. I've had two before and many pap smears, all of which were negative. So I wasn't expecting a call yesterday morning from the technician who did the mammo. She knew I'm leaving the country soon, so she told me to call radiology for an ultrasound appointment right away. The doctor who reviewed my mammogram saw something suspicious on my left breast and wanted another look.

The appointment guy scheduled me for next Monday at 12:30. "Don't you have anything earlier," I protested. "I'm leaving the country next Tuesday."

Under normal circumstances, nobody wants to hear that a doctor saw something suspicious and needs more studies. But just days away from getting out of here, cramming to get everything done, not having a moment to breath, and anxious to be reunited with Andre after two months apart, this was shocking and depressing news.

I kinda freaked and cried a bit. After losing my daughter to brain cancer in January it seems like everyone's dying of cancer. I felt like running away from the Bay Area, which has the highest rate of breast cancer in the world. I imagined myself making a quick trip to Dominican Republic just to see Andre one last time before I die. I couldn't even reach him on his cell or home phone.

Then, little by little, I got a grip on myself. I started talking to friends, many of whom had had similar experiences, but the ultrasound only turned up fibroids or odd tissue, nothing to be concerned about. My cousin reminded me that fibroids run in our family and I do have them in my uterus which causes heavy periods, but no pain, so I leave them there. I also reminded myself that I'm not really overdue for a mammogram, so if there is something, we probably caught it early. I also examined my breasts myself and found no lumps or pain anywhere. I have my fingers crossed that I'm one of the majority who goes for the ultrasound and that's it. I'm hoping I'll still be able to fly next week.

I called this morning to see if there were any cancellations and I got lucky. I'm going in for the ultrasound in a half hour. I'll keep you posted.
Posted by Carole Chelsea George at 3:22 PM