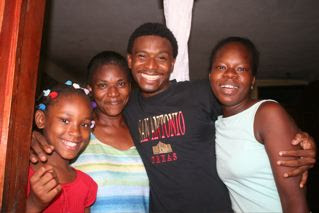 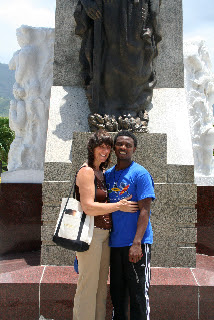 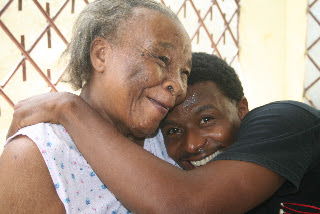 Andre and I took the bus from Santo Domingo to Port-au-Prince on Sunday, which lasted most of the day. Andre warned me that the border crossing would be horrible, but compared to my experience in third-world countries, it was nothing. No military, just U.N., nothing scary, no bribes, they didn't even look at our baggage. It took a long time because they do it in a Stone Age fashion. First we had to wait on the bus a long time, then everyone piled into an office where our passports were stacked on a desk. An uninspired clerk called out the names one-by-one and waited until the owner of the passport responded. Once he went through all of them, the passports were taken to another office. Again, we waited while they called out our names all over again, this time adding a stamp and returning the passports so we could continue our journey.

I'd been told by one of the owners of the hotel where Andre used to work in Santo Domingo that Haiti is "another world." I really haven't found it to be that different from Dominican Republic, except that they speak French and Creole instead of Spanish. Also, the power outages last most of the day, instead of just a few hours. For a treat, the power came on at the beginning of the semi-finals of the America Cup last night and went off just as Brasil finished off Uruguay 5-4. I doubt that was a coincidence since Haiti is crazy for soccer. Tonight we'll be watching Mexico vs. Argentina in the 2nd semi-finals. This will be our first fight. I'm rooting for Mexico and Andre wants Argentina to win. But how can I turn my back on Maya's birthland, the country that was 8 miles from my childhood home?

We stayed 3 nights with Andre's sister Marjory, her husband Lesly, their 7-month-old nephew Joel and his mother Maude who is recuperating from a major hysterectomy. They obviously haven't gotten word yet that you don't need to cut a woman completely open to take out her uterus. Maude just had the operation 2 weeks ago, so her recovery period will be much longer still. She's on complete bed rest, on a cot in the carport/patio where we all hang out during the daytime heat. They don't have a refrigerator, but since they hardly get electricity, what would be the point? They have a well instead of running water, so they pull up bucketfuls as needed, to bathe and flush the toilet, etc. Otherwise, the house looks very modern since it was just built a year ago. Marjory's husband is a teacher of French, Creole and French Literature, so they're definitely middle class. He told me that elementary school teachers earn about $60 a month. We spent $30 on lunch for four in a restaurant, so I don't know how they make it when everything is so expensive.

Instead of taking taxis or tam-tams (pick-ups that are covered in back), we pay gas money to a friend of Andre's youngest brother Reginald. It's somewhere between $4 to $6 a gallon. I can't figure out the money at all because it's a mixture of Haitian dollars, gourdes, U.S. dollars and Dominican pesos. I just let Andre pay for eveyrthing because he seems to understand it better. Very few roads are paved, so Francois, our driver, goes really slowly and carefully to take care of his nice car. Yesterday, Andre's stepfather showed up with another neighbor with his car. He had to restart it a million times in traffic until he pulled off and put water in the radiator. Andre started laughing as I pulled out my videocamera to document our whole group pushing the car off the road with people crowded all around.

Looks like I've passed the test with Andre's family. My crash course to relearn French seems to keep them laughing at least. Lesly speaks good English, Reginald knows some too. I pick up enough of their Creole conversations to know what's going on. I've taken tons of photos and video. My age hasn't been an issue at all. I had him ask his mother if she had any questions for me. She wanted to know how I was handling the heat. I suggested to him she might want to know what my intentions are with him. He's already told her that we're planning to marry next year after he arrives in California, if all goes as we anticipate. She said the important thing is that we love each other.

I was really happy to meet his grandmother. She's the one he credits for making him such a gentleman. You can tell, even though she's in her early 80s, that she's a beautiful, educated woman. She was so sweet and clearly happy to meet me too. She's suffering from anemia, brought on by lack of appetite. I told Andre I'm afraid she won't live much longer because it sounds like someone who's getting tired of living.

Today we arrived via 9-seater plane, taxi and speedboat, on an island paradise called Isle a Vache (Cow Island) off southern Haiti. The Hotel Port Morgan (one of two on the island) is owned by a very nice French couple. We were served an exquisite lunch of quiche, rice, bread and butter, fish with sauce, green salad with sauce, and for dessert what looked and tasted just like flan but was called creme something-or-other, but not brulee. It was filling, but not heavy. Andre is sleeping it off in our air-conditioned room. I'm taking advantage of internet in the office, surrounded by smoking French women.

This would be the place to bring someone if you wanted them to fall in love with you forever. I'll have to post photos soon. It really is another world.
Posted by Carole Chelsea George at 1:44 PM

Glad you passed the family test! Cannot wait to see the new photos. : )