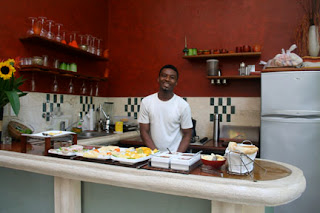 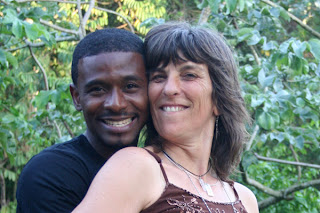 A year ago, if someone had told me my daughter would die of a brain tumor, and then I'd leave the country to be with a Haitian man 20 years my junior, I would have called them crazy. Usually I enjoy life's surprises, and I look for the silver lining on even the darkest clouds, but losing Maya was the hardest thing I've ever had to endure.

Last week, I canceled the trips to Canada and Chihuahua, and moved up my flight reservations to Santo Domingo, Dominican Republic. God willing, and assuming I get everything done in time, I leave June 19 and stop off in Texas to visit my niece Stephanie, her mother Lisa, and son Alex. Steph just went through an ugly divorce, but the good news is a family friend offered her a great opportunity to buy a home. I gave her the down payment and she wants me to see the place. We also need to give each other a big hug.

On June 22, I fly onto Santo Domingo where Andre will be waiting. This time I hope we won't have to separate again. Our plan is to introduce me to his family in Haiti, travel to whichever countries will give him a tourist visa, and come back to the U.S. once he gets his fiance visa, hopefully in spring 2008.

I'm so tired of being separated from Andre. We met on August 6, 2006, the day Maya and I arrived in Santo Domingo from a wedding in Puerto Rico. Maya rejected the divey hotel I'd seen on the internet (hey, it looked fine in the pictures), so we set out in search of something better. Just around the corner we found a beautifully renovated colonial hotel called Atarazana. We rang the bell and Andre let us in. I know it sounds cliché, but the moment our eyes met electricity raced through my body. I hadn’t felt anything like that in years.

I tried to ignore my attraction for Andre because of our obvious age difference. I was 49 and he looked no more than 22. Originally, I'd planned to stay a day or two in the capitol, and then head out to explore the countryside. But Maya fell in love with the hotel, the staff, and Santo Domingo, so we ended up staying a week. She and Andre became great friends, but I kept my distance. I chatted briefly with him while he served us breakfast each morning and sometimes he caught me staring at him, but I always looked away.

Finally, I couldn’t resist the temptation to take a photograph. Don’t move, I told him. I love the way you look in the beautiful red kitchen. That is still my favorite photo of him. He looks gorgeous with his warm, friendly smile, but most importantly, this photo, which I emailed to him at his request, got us started writing to each other.

Little by little our emails became more flirtatious, but still I couldn’t believe that such a young man would be interested in me. I assumed he saw me as a mentor, someone older and wiser he could open up to. He asked me how you know you’re in love, and what’s my opinion of long distance relationships. For a second, my heart would skip a beat, hoping he was referring to us, but then I’d quickly return to reality.

Finally, in November I decided to try my luck on craigslist. I even dated a guy a few times: a white American, 55 years old, who lives here in Santa Cruz, not bad looking, in decent shape. He even liked me.

When I wrote Andre about this guy, he said he was feeling jealous. “If you want a man, here I am.” That stopped me short. I wrote back and admitted I’d been attracted to him from the start, but because of his age I hadn’t thought much more. When he told me he'd be 30 in April, I opened my mind and my heart.

Andre and I were planning a rendezvous when Maya got diagnosed with a brain tumor. After she died on January 16, 2007, my whole life changed. I wish I could have sent Andre a plane ticket, just to come hold me, but only rich Haitians get tourist visas to the U.S. Finally, in March I was able to be with him in Dominican Republic. After three glorious weeks together, it was so hard to leave.

Now I'm counting the days until I can be with him again. Besides getting everything ready to leave, the only things I'm doing are exercise and therapy. So, if I don’t have time to say goodbye, please know that I will be in touch via email, Skype (I can call you for free), and this blog. Don’t be shy about contacting me. I love all of you and am happy to respond individually as time permits.
Posted by Carole Chelsea George at 8:44 AM